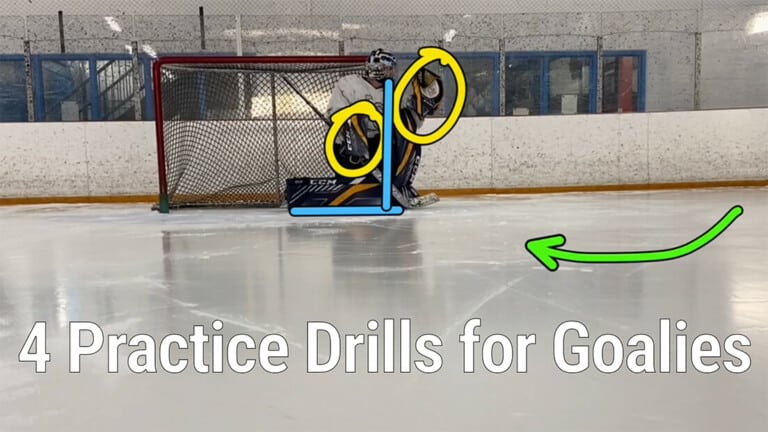 Learn about the VH and why it is effective for shots on the dead angle or when there is not immediate back door pass option.
5
(1)

The Vertical Horizontal (VH) was one of the first post integration save selections, developed by François Allaire. Francois was the goalie coach who, with Patrick Roy, modernized the butterfly and is credited with changing the goalie position to what it is today. After his time in Montreal with the Canadiens, Allaire left for Anaheim where he eventually hooked up with J.S. Giguère. Together they developed what was known as the “block” style of goaltending. Building off what he had started in Montreal, Allaire identified that if the goalie “played the percentages” they could cover a lot of net with minimal effort. With the style of game played in the NHL in the early 2000s, the goalie could drop and “block” on most shots inside the red zone (the space below the hash marks and inside the dot lane, in the defensive zone).

Building off this philosophy, Allaire wanted to re-evaluate how goalies played shots from the dead angle (when the puck is located low in the zone, near the bottom of face off circle below the hash marks and above the goal line). The “older” style was to stand straight up against your post, which minimized your ability to control pucks on the body. The other option was to drop into the butterfly, which was superior for shot/rebound control, but limited mobility.

The VH is a combination of the two styles. The vertical being the post leg/pad being straight up against the post, sealing the short side. The vertical leg also allows the goalie to push off laterally on any passes or rebounds. The horizontal being the goalie’s back leg, is in a half butterfly, sealing the ice and allowing the goalie to slide block on any passes/rebounds in the red zone. A lot of coaches and goalies have stopped training this save selection as they prefer the RVH (Reverse Vertical Horizontal). In the NHL there are still many goalies, including Jonathan Quick and Craig Anderson, who still use the VH, similar to the stack pads there is still a time and a place for the VH. Goalies have become predictable and players are starting to learn some of our tendencies. It is important for all goalies to have a deep tool box depending on the situation and read. The VH is most effectively used on 1 on 1’s for shots on the dead angle or when there is not immediate back door pass option.

Learn about the VH and why it is effective for shots on the dead angle or when there is not immediate back door pass option . . .