4 Steps for Teaching a Hockey Breakout

Utilize multiple drills either as part of your warm-up, stations, or on half or full ice.
4.4
(8)

When I wrote about teaching systems while maintaining creativity, I touched upon a breakout drill I consistently use at practice. One question that arose more than once from that article was how do we progressively teach that breakout so as they learn it, it can become more consistent?

We do this by utilizing multiple drills either as part of our warm-up, stations, or utilizing a half or full ice sheet. Each progression builds on the last and by the time they are running the full breakout, they have so many repetitions on each part that it almost becomes second nature when they put it all together. 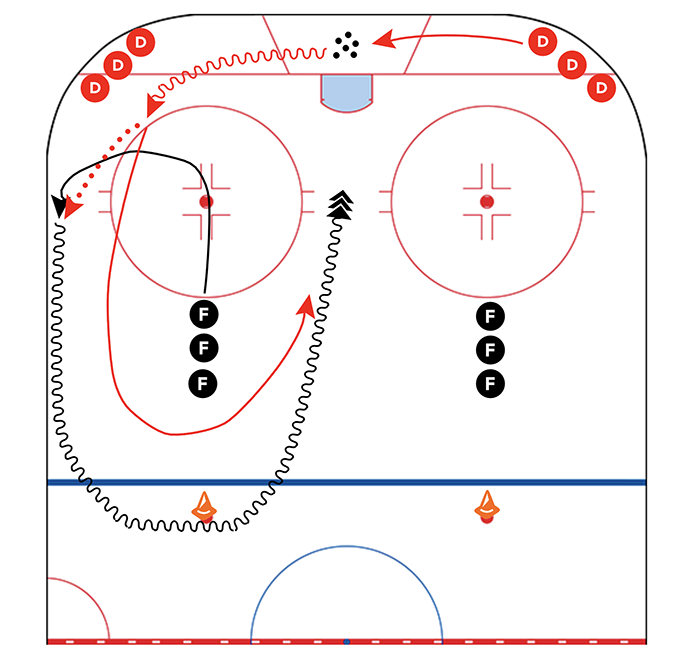 This drill doubles as a good goalie warmup while also working on a simple breakout pass. On the whistle, the defender skates behind the net and picks up a puck. At the same time, a forward is skating and opening up on the board to take a pass. Once the pass is complete, the forward skates out of the zone and reenters for a shot on net, while the defender goes around the forwards in line and attempts to defend.

When first running this drill, you can remove the attacking defender and just have them make the pass and get back in line. This re-enforces the pass, and then you can layer on the attack later.

On each whistle, alternating sides go.

Utilize multiple drills either as part of your warm-up, stations, or on half or full ice . . .