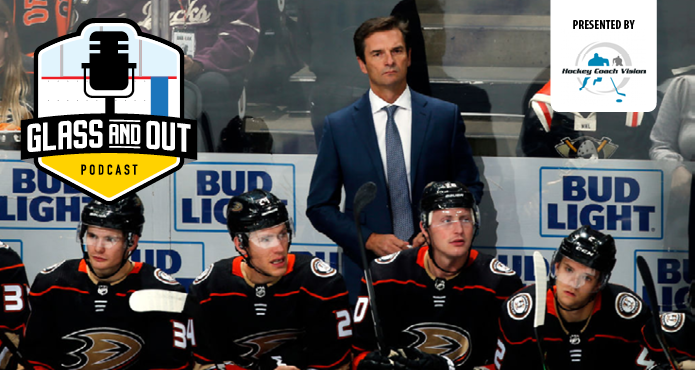 Welcome everyone to a new year of Glass and Out podcasts! We hope you had a safe and happy holidays.

To kick off 2021, we welcome Anaheim Ducks head coach Dallas Eakins. Eakins was gracious enough to join us on the eve of the start of Anaheim’s training camp (December 31), as the Ducks and the rest of the NHL prepare for what is sure to be a season like no other.

With the many challenges and increased stress that is sure to come with the upcoming season, it has never been more important for everyone involved to keep a monitor on their mental health.

As Eakins heads into his 16th season as a professional coach and second as head coach of the Ducks, he’s learned a few keys to making sure he and his team are on top of their mental game.

For Eakins, creating a positive team culture is the first step to creating resiliency. You can check out his 2020 NHLCA Online Global Coaches’ Clinic presentation on the topic here.

Another key? Taking good care of your physical health. Eakins is well-known for his commitment to exercising, eating healthy, and getting the right amount of sleep. To him, physical health and mental health go hand in hand — coaches included.

The Sault Ste. Marie native got his coaching career started in 2005 as an assistant with the Toronto Marlies under Paul Maurice. After just one season, Eakins was promoted along with Maurice to the Leafs, where he’d remain an assistant for thee seasons. He would then return to the Marlies as head coach for four seasons, leading them to one Calder Cup appearance. His first NHL head coach gig would come with the Edmonton Oilers for two seasons. Then, after four season with the San Diego Gulls, he’d jump back to the NHL with the Ducks.

In this week’s podcast, hear more about his keys to dealing with stress and staying mentally healthy, how he’s approaching the uniqueness of the upcoming season, and how he’s trying to instil a positive team culture within a rebuilding Ducks franchise.