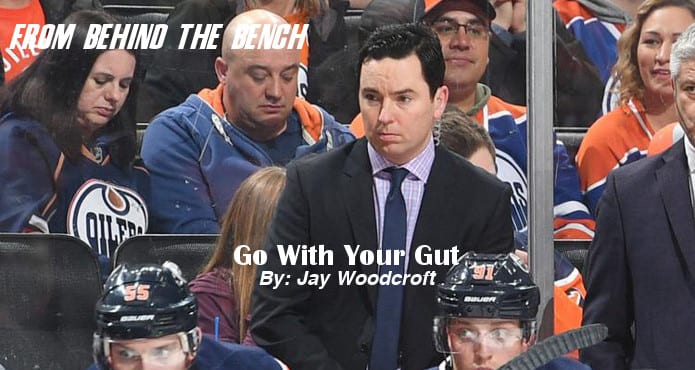 Jay Woodcroft recently became the Head Coaching for the Bakersfield Condors, the Edmonton Oilers’ affiliate in the American Hockey League. After 13 years as an assistant coach in the NHL, first with the Detroit Red Wings (2005), then the San Jose Sharks (2008) and more recently with the Edmonton Oilers (2015), Jay has spent most of his coaching career in the elite coaching lineage of Mike Babcock and Todd McLellan. Not to forget his other influences, brothers Todd Woodcroft, Assistant Coach with the Winnipeg Jets, and Craig Woodcroft, recently an Assistant Coach of Canada’s men’s team for the 2018 Winter Olympics.

In this edition of FROM BEHIND THE BENCH, the newly minted Head Coach talks about how he made the difficult decision to make the move to the AHL, what it’s like traveling to the forests of Siberia with one of the best players in the world, and how important it is to surround yourself with good people.

I’m Jay Woodcroft and I’m the Head Coach of the Bakersfield Condors in the American Hockey League.

I’m very excited about the opportunity in Bakersfield, not only for my career but to coach for a proud organization with such a rich history. There’s a new wave of young players coming into the Edmonton Oilers organization that I’m excited to work with and I take the responsibility very seriously.

It was a very, very difficult choice to make. I’ve been in the NHL for the last 13 years and it’s what I know as a coach. I’m very comfortable in my relationship with [Oilers’ Head Coach] Todd McLellan, who I worked alongside with for over a thousand games.

When I was presented with this choice, I had to think about what the next step in my career path should and could be. This is an opportunity to run my own bench in an atmosphere and organization that knows me, and to do so in a proud hockey community. I already understand the landscape that I’m getting into and I know that I’m aligned with how the game is coached at the highest level there.

I spent seven years with the San Jose Sharks so I have a good understanding what California is about, and it’s where my two children were born. I also know that the state of hockey is underrated there, in [light of] the amount of players they’re producing and in terms of the fan base that’s there.

After careful thought and consideration with my family, my brothers, and with Todd, the thing that swayed the decision the most was that it just felt right in my gut.

From Seneca to Siberia

One of my introductions to coaching was working at hockey schools as a young man. I started when I was 14 years old as a junior instructor at Seneca College Hockey School. That’s where I first learned how to lead people, and I also got to learn how to work alongside other coaches. It left a real impression and a love of passing my knowledge of the game on.

As my brothers and I grew up and went on in our hockey careers, my oldest brother (Craig) started (Northern Edge Hockey School) which was very successful in the US. My brothers and I worked there for years as we transitioned from our playing careers into our coaching careers.

I later had the opportunity to work with the Detroit Red Wings, and Pavel Datsyuk approached me about starting something in his home town of Yekaterinburg, which is deep in Siberia.

It was his vision to give something back to his community and to Russian hockey. So for the past 10 years, in cities all over Russia, including Moscow, St. Petersburg, Kazan, Nizhnekamsk, we’ve had the chance to bring North American coaches over to Russia to work with some of the best young players in the country. It’s been extremely rewarding, and as a life experience, it’s really opened our eyes.

When you throw yourself into an environment like that—where you don’t speak the language and everything is new and foreign—it refines your skills as a coach because you have to boil everything down. There are no long-winded answers, there’s only speaking the language of information and correction.

As much as we were going over to teach the players, they were teaching us as well. What strikes me about the young Russian player is their work ethic. There’s very little pushback, and they’re very skilled at a young age. They have some good players coming up!

Working with Pavel, one of the best players in the world, and to see his love for his countrymen, his generosity in giving back to his community and how gracious he was with his time and care for each and every young player, has certainly left an indelible impression on me. He is not only a Hall of Fame player, but also a Hall of Fame person as well.

Without a doubt, Todd McLellan is my biggest professional influence. He’s someone I’ve looked up to for the last 13 years and it is quite obvious that he’s at the top of his field. Every day was an education with him—he redefined terms like leadership, dedication and integrity for me. He taught me that successful coaches don’t make it about themselves, that it’s not about credit, spotlight or blame. That the most important trait of successful people is a consistent effort to do things right on a daily basis.

Now he and I will be working together in a different way but we’re still working closely together, and that was one of the appealing things about taking this position There are real advantages to this, not only for us personally but for the organization. It guarantees a philosophical alignment, a continuity of message, and a certain type of language used throughout the organization as a whole.

When I first took this opportunity, I sat down with Peter Chiarelli, our general manager. We talked about working together to put the best staff in place to ensure our prospects are taught on a daily basis the right way of doing things. I’ve  seen firsthand how to build a cohesive, intelligent, hardworking staff that can help propel a team going forward.

I believe that  people are a product of their influences, and I’ve been fortunate in my coaching career to have been around some very strong coaching personalities who have shown me how to handle myself in the good times, and, most importantly, how to handle adversity.

I think that’s one of the best parts of the game of hockey, the quality of people that are in it. Two of my biggest mentors, Todd McLellan and Mike Babcock, are at the top of their fields, are great communicators, they’re meticulous in their preparation, and they set the example they want to see in their players. They both create a want-to-play-for mindset, and both of them epitomize the word leadership.

I also have the belief that your first mentors are your family. At a very early age, my mom and dad instilled a work ethic and the value of education in me. My older brothers are also huge influences on me; not only are they my best friends but they are also people that I’ve learned from. And now I have my own family, and  I take the lessons learned from my wife and children and carry them into my coaching as well.

It’s important that you put yourself around good people that can help show you the way.