Beyond the X’s and O’s Podcast: Championship Talk with Andrew Cogliano 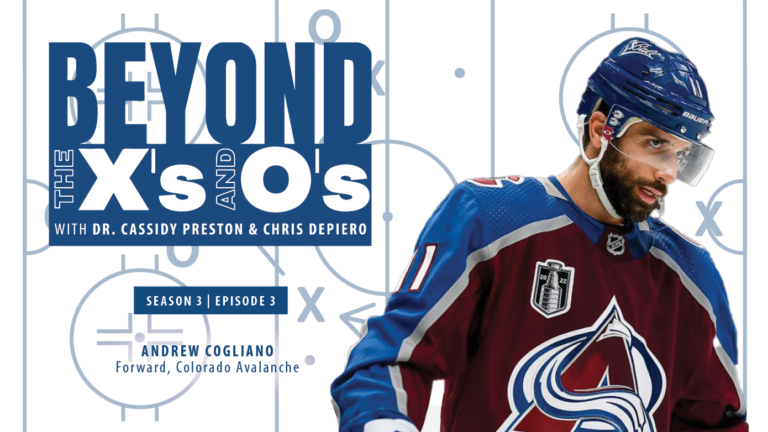 The Coaches Site is proud to host the Beyond the X’s and O’s with Dr. Cassidy Preston and Chris DePiero in our podcast network! Stay tuned for weekly episodes as they help coaches develop the “human” skills of leadership.

Andrew Cogliano has spent the past 15 seasons in the NHL amassing 1,140 games, of which he had a consecutive streak of 830 games. He recently won the Stanley Cup with the Colorado Avalanche. He previously played for the San Jose Sharks, Dallas Stars, Anaheim Ducks, and Edmonton Oilers (the team who picked him in the 1st Round of the 2005 NHL Entry Draft).

Championships seem to follow Cogliano, as he has also won internationally representing Canada at the World Junior tournament, winning two gold medals, as well as being on the U-18 Canadian team that won gold, and representing Team Ontario, winning the gold medal at the U-17 World Hockey Challenge. He also led the St. Michael’s Buzzers Jr. A team to an Ontario Championship. He truly has a team-first mentality and is dedicated to helping his teams win.

In this episode Cogliano shares:

The bottom line is you will get to see a unique perspective into Cogliano’s mindset and how he is clearly someone who goes Beyond the X’s and O’s.

Beyond the X's and O's Podcast

The Beyond the X’s & O’s Podcast is hosted by Dr. Cassidy Preston, a Mental Performance Coach & founder of CEP Mindset, & Chris De Piero, a High-Performance Coach that has spent the past 30+ years in the game of hockey within the NHL, Hockey Canada, OHL, and European pro hockey. Cassidy is one of Chris’ former players where they won OPJHL Championship together in 2006. This podcast was born from their shared passion for helping coaches and leaders to go Beyond the X’s & O’s and develop the ‘human’ skills of leadership. Outside of the podcast they work together at CEP Mindset where they coach elite athletes, coaches, teams, and high-performing executives to achieve Consistent Elite Performance.