FROM BEHIND THE BENCH: Athletes First by Brad Frost 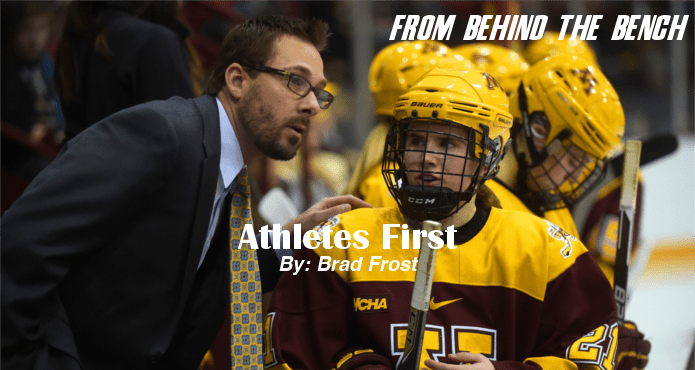 Brad Frost has been on a winning streak. Since he took the helm of the women’s program at the University of Minnesota in 2007, the Gophers have had seven Frozen Four appearances and have taken home the championship four times in the last five years. Brad believes deeply in developing better people on and off the ice. By taking an “Athletes First” approach, Brad raises the bar for his players to develop into well-rounded people, regardless of their gender. Despite the demands on female athletes, women’s programs don’t often get the same clout as men’s, so we wanted Brad to shed a light on what’s special about his team. Here’s what he had to say.

Something that’s unique about female athletes that I learned early on in my coaching career is that they don’t care how much you know until they know how much you care. I think guys feel that way as well but I think with young women, they want to know that you care about them deeply and that you have their back. That’s how our staff looks at our program and our players and sometimes that means kicking them in the pants and sometimes that means giving them a hug.

But I look at our players as athletes first and foremost, I don’t look at them as girls. Our schedule is rigorous, we practice four days a week and usually play on Friday and Saturday. They are conditioning and lifting two or three times a week during the season, and out of season, they’re lifting five days a week, training with our strength coach, and training on their own. It’s very similar to any men’s program out there, we practice for just as long and just as intensely.

While our players are here, we want to treat them with the utmost respect. We’re not big yellers, we try to communicate as well as we can on how to meet our expectations. And we expect our players to uphold those standards to the best of their ability and when they mess up, we hold them accountable and they become better people because of it. But what we really want is to have is a whole lot of fun, and because of the people we recruit and work with, it allows us do that each and every day.

Step one in the recruiting process is evaluating the players on the ice when they’re in 9th and 10th grade, to see if they’d be good enough players to play for us down the road. After that, we see if they can fit within our system and program, so then we need to get to know them as people. Prospects come in on visits with their families and we talk with their coaches and people that know them well.

We’re pretty good in our discernment if an individual has good character or not. In our program, we don’t have to take risks on people with questionable character or integrity because we know that we’re going to be able to find some really good people that happen to be good hockey players too. I love the players that we are able to attract, we’ve found a blueprint for success in regards to the types of people and players that we recruit.

Obviously we want to win hockey games but we want to do that in the right way and for us, it’s about the culture and process. We have four values: being tough, graceful, disciplined and devoted. Success is embodying and fulfilling those values on a day-to-day basis, from our staff down to our players—that’s what we expect out of ourselves and our players, and that’s what we want them to strive for.

Success is not going to be whether we win or lose our last game, it’s going to be giving the best effort that we can, having the best attitude, and really playing for the person next to you. Obviously the outcome is that you want to win hockey games but you have to focus on the process to do that.

As a coach, I can’t say, “Go out there and win this hockey game,” but I can go out there and say, “Keep it simple, let’s put pressure on the puck, let’s not take any dumb penalties, give your best effort.” Those are things the players can control and it will add to their success.

I love the opportunity to be passionate about the game of hockey and to be able to teach others about it. But if we as a staff are helping our athletes just become better hockey players, then we are failing them. It is absolutely vital to our success and our job description as coaches to make sure we help our players develop into better people. That is what is rewarding to us, to see them graduate and see them still involved in our program and out there as valued members of society, making our world a better place.

We’re in the middle of a pretty special run here, and it’s somewhat surreal when you step back and think about the fact that we’ve been in five national championship games in a row and have won four in the last five years. But it really does come down to the players on our team and their ability to buy into the culture that we’ve set before them. I really commend our players over the last number of years. They are the reason that we’ve won national championships—it’s because they are special people and special players and they deserve everything that they have achieved here over the last five years.

We have a number of players leaving this year, Olympians and All Americans. What’s interesting about being at the University of Minnesota is that every year, you graduate players like that and it’s on the returning players to have a great summer and come back even better than they were this past year. Every year is different and it’s important for us to get everybody to buy into our program, so we can have another successful season.

It’s everybody’s goal in our league to get to the Frozen Four every year because it’s really hard to win one if you’re not there. But you never really know what can happen once you get there because there are always four great teams. I tell our players never take it for granted because we’ve had years where we didn’t make it to the Frozen Four. It’s never a guarantee so you’ve got to live in the present and try and take advantage of the opportunity that you have in front of you.

As for any advice to young athletes out there, male or female, I think it’s important for kids to play a variety of sports growing up; what I see happening more and more is the specialization of sport. Hockey players are athletes so it’s important to play lacrosse and soccer and softball, other sports will help you in hockey as you continue to grow and mature. And I think it’s important to enjoy it and have fun with it, I think too many kids are getting burnt out from playing too intensely from such a young age. And, of course, watch as much hockey as you can—it helps you become a better student of the game and will ultimately help you become a better player.