View all posts
"Everybody has to be respected. They have to feel respected."
0
(0)

“Success and winning are not synonyms.”

Those are the words of Jukka Jalonen, head coach of Finland’s men’s national team, who has, coincidentally, done a lot of winning in his career. In 13 years with Team Finland, Jalonen has helped his country punch above its weight class in a number of tournaments. He was the head coach of gold medal winning teams at the IIHF World Championships in 2011 and 2019, as well as the World Juniors in 2016. Jalonen also helped the Finns win a bronze medal at the Vancouver 2010 Winter Olympics.

Speaking at the 2020 NHLCA Global Coaches’ Clinic, Jalonen, who has nearly three decades of coaching experience, shared some wisdom for how he builds successful teams.

“For me, the most important thing when building a team is to be able to build a trusting atmosphere and great team spirit,” said Jalonen, who added that this goes for coaches, players, and management.

A trusting atmosphere is the backbone of a successful team or organization, says Jalonen, who preaches openness, honesty, and fairness with his teams.

Jalonen makes his players fill in a questionnaire before a tournament, asking everything from marital status to what they expect from themselves on the ice. One thing he found out was that most players thought the most important thing was to be respected, no matter the role.

“Everybody has to be respected. They have to feel respected.”

Check out the preview below, and watch the full hour-long video with a membership to The Coaches Site. 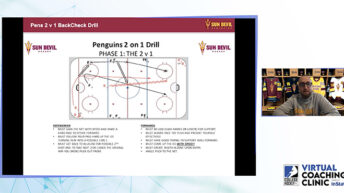