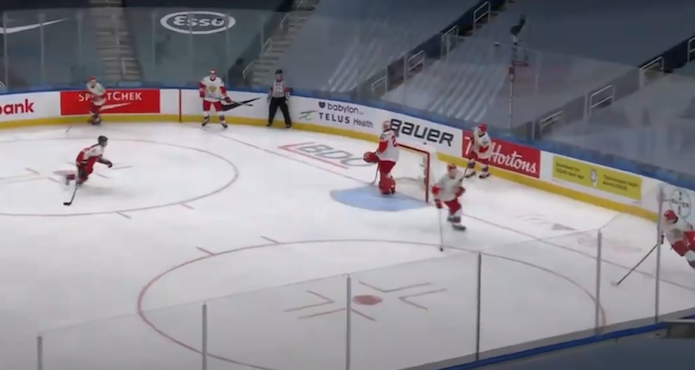 I don’t remember a year like this one recently at the World Juniors. Teams were holding onto the puck way more than usual, with more regroups and controlled breakouts.

In this article, I have decided to look at some of the controlled breakouts from the tournament, showing you four types of exits that teams used during the World Junior Championship.

To slow the play down, useful when finishing a line change or getting away from pressure, stopping behind the net is the first step for a controlled breakout.

In the following video, notice two players coming back low and swinging on each side of the ice. At the same time, the puck carrier starts skating through the middle of the ice, trying to make the best decision with what is available.

From there, notice the options both players coming back low have as they skate up the ice.

Similar to the one above, this breakout involves adding a third player. Players are filling lanes, which allows for more options and speed coming up the ice. The puck carrier can easily hit the middle player with a pass who is a bit higher and has outlet options.