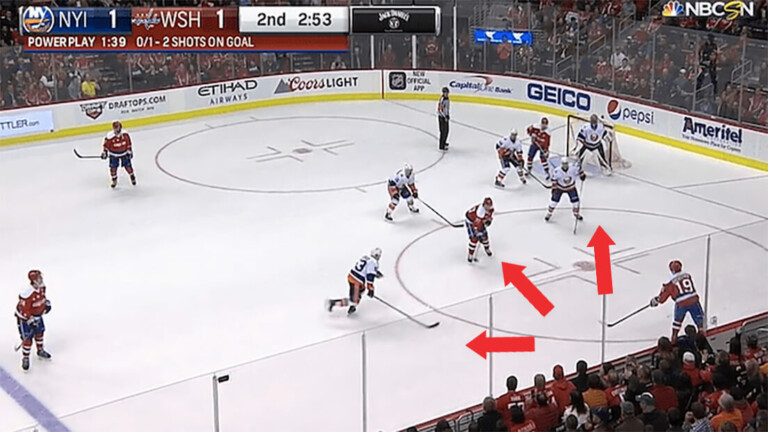 Learn the best power play formations to use to increase your scoring chance volume.
5
(2)

Special teams play in hockey is often matchup based due to coaching choices and so we should analyze it that way to gain an edge. The previous piece I wrote was focused on breakout plays and the corresponding forecheck. Today, we’re going to talk about puck movement in the offensive zone once the power play sets up.

Many fans have watched their team move the puck along the perimeter at varying speeds with varying success as well. One of the things I wanted to look at was how, if at all, did the location of the puck influence the penalty killing team’s coverage. More specifically, were teams more or less likely to adopt an aggressive posture based on the puck’s location?

To answer this, we have to look at a few other factors first: 1) Which defensive zone coverages yielded higher quality chances; and 2) from where on the ice could we create the most dangerous chances from? We’ll start with shot density maps against the following coverage schemes – a Czech Press, a Wedge +1, and no obvious structured formation. The way to read these is if an area is darker, there are more shots taken from that area. Observe the shot densities against a Czech Press.

Learn the best power play formations to use to increase your scoring chance volume . . .

Individual Physical and Mental Skills for Killing Penalties: A Guide For Players & Coaches