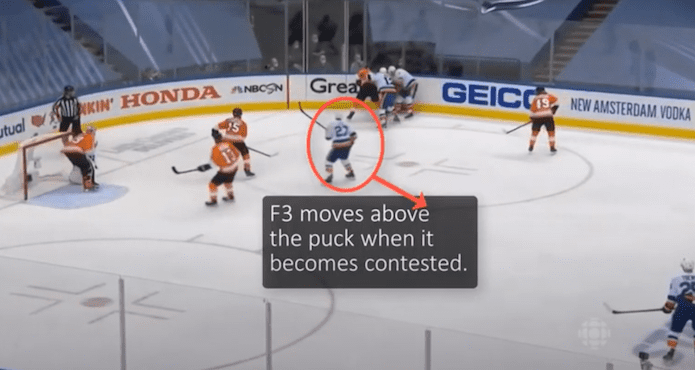 Many of the brightest stars in the NHL fell early in the 2020 postseason, their great individual talent stifled by extensive defensive structures. It’s a reminder that while top players usually have the most pull, a group committed to shutting them down can haul itself up even higher in playoff rounds.

Teams like the New York Islanders, Vegas Golden Knights, and Columbus Blue Jackets lined up impressive performances in the last few weeks by applying great defensive principles all over the ice. Those formations don’t wait for opponents to enter their end of the ice before thinking about shutting them down. They coordinate themselves to do so even when they still have control of the puck.

How? By having their attackers move up-ice in ways that guard against counterattacks. It doesn’t mean that they forfeit offence. Quite the contrary, good defensive positioning often aligns with good offensive positioning.

By skating up-ice with their forwards, defencemen can cross the offensive blue line at just the right time to receive drop passes and shoot from the top of the slot. But blueliners activating with the rush also has another benefit — it reduces the gap between opponents and the defensive line at the top of the offensive zone. If the puck turns over, the other team has less space to organize a counter-rush.

In the video above, Shea Theodore, the weak-side defenceman, runs to the offensive zone with the first line of the Golden Knights. William Karlsson misses a cross-ice pass and the puck bounces to a Canuck. As Theodore followed his forwards up-ice, however, he put himself in a perfect position to swat the puck away from the opposing stick and back down the zone, reestablishing the offensive presence of his team.

2. Moving above the puck

There’s an inner battle in all forwards — they want to score, but have to limit risk. This conflict between offence and defence peaks in puck battles on the sideboards of the offensive zone.