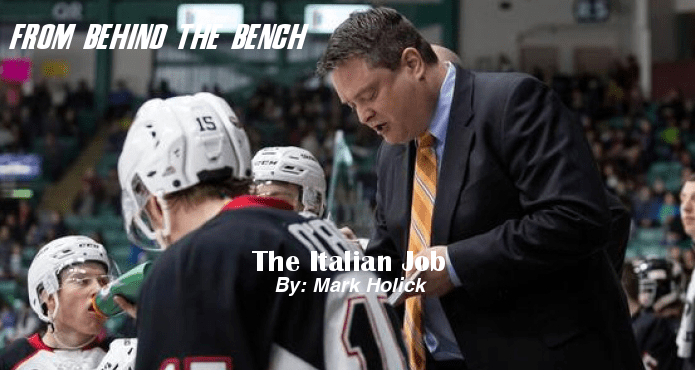 Mark Holick was very familiar with North American ice after leading the WHL’s Prince George Cougars and the Kootenay Ice, as well as the AHL’s Syracuse Crunch. Not to mention coaching stints with the South Surrey Eagles (leading to a Royal Bank Cup victory), as well as multiple turns with the BCHL and AJHL.

These days, however, Mark finds himself in a quaint mountain town near Italy’s northeast border, close to Austria. It might seem like a big jump going from the intensity of western Canadian hockey to the AlpsHL, a brand new league resulting from the merger between Serie A and the Inter-National League, but Holick thinks otherwise. In this instalment of FROM BEHIND THE BENCH, Holick tells us what brought him to Bruneck, what it’s like coaching for the Pustertal Wölfe and just how pleasantly surprised he’s been since arriving.

The opportunity just kind of came up. I had some interviews in the Austrian League and talked to a couple of teams in Europe with Pustertal being one of them. The first time I spoke with anybody from here was towards the end of May and it evolved from there. Close to the end of July or early August, they called and made an offer. My wife and I had talked about Europe being an option one day and when this came up we just thought, why not? Let’s take a run at it and see what happens.

I didn’t really know a whole lot about the town, and it’s a brand new league — the Italian hockey played in their own league and the Austrians played in their league and they merged this season. There are 16 teams and it’s a new league for everyone. Bruneck is a ski town, the hill is a ten minute drive away. The rink is an open air rink — it’s got a roof but the ends are wide open — so if it’s cold outside, it’s really cold inside.

I wasn’t sure what to expect from the team either, but I can tell you there’s a difference in effort. It’s different because almost every guy on our team has a day job. We have 21 guys on our roster, and maybe four or five don’t have day jobs. The rest work as farmers, or in the tax office, guys that are in all kinds of industries here. So, we practice in the evenings, and I was very pleasantly surprised at how these guys come to the rink to work every day.

Most of the guys get there as quickly as they can after work. We get our video work in and then we’re on the ice for an hour or an hour and fifteen minute practice. We have two games a week, Wednesday and Saturday nights. So, it’s not a busy schedule like I was used to in North America where sometimes you’re playing three or four nights a week, and there’s really not a whole lot for them during the day from me.

But I was very pleased with the way the guys embraced their team. They take ownership, they police each other, it’s been awesome with accountability — they are really proud to wear that jersey and be part of this team. There’s a lot of expectation from the community and the players make sure that everyone lives up to that. The really refreshing part of the experience for me is how much the players take ownership and pride in making sure that everybody is towing the line.

The reception has been unbelievable, and everyone’s helped me a great deal. If I’ve had any questions on how the day-to-day stuff runs, our captain, Armin Helfer, a veteran of European hockey, he and a couple of the other guys have made it a seamless adjustment for me.

You need that coming into an experience like this. I came in not really knowing what to expect and these guys have really taken it to the level I brought. I push our guys and try get them to be the best they can be. They bring their best and it’s been that way since day one. I got here August 19, and we started camp on the 21st and they just worked really hard right away. There’s been no complaining, it’s their job and they come to work hard and have a little fun. It’s been a real enjoyable atmosphere to be in.

I was concerned that the language barrier would be a problem. Even though I’m in Italy, the main language is German, but most of the players speak German, Italian and English. I can coach in English and communicate with them, 90 percent of the time it’s been really easy.

And the fans here have been second to none. We were on the road the other day, a four plus hour drive, and the local fan club rented a bus and followed us out there. It was a big game against a team we’re vying for for one of the top spots against, so the locals met us out there and were really loud and boisterous, and it really helped our guys. Usually on a road game, the fan club is there, and for them to show up every time is really powerful for our guys.

The community in town is really receptive, we’ve had 2,500 people at our home games, and it’s unbelievably loud in the rink. It was quite an eye opener for me early on when I saw that, I really love the way the fans embrace the team and the way the team embraces the fans.

You see things here that you don’t see back home. We had a “meet the fans” night after a game one night and before you knew it, there was a truck on the ice and the back was full of beer. All the fans were on the ice and the players stayed and everyone was having a real good time. I was looking around thinking, “what’s going on here?” in a good way though. It was a really neat thing to see — the fans take ownership of the team and they support each other so it adds a lot to the experience. Our record certainly doesn’t hurt, being where we are as far as the standings are concerned [the team is currently second in the league].

I have a contract for the season so that’s what I focus on, helping this team do as well as they can so the fans and community are proud of us. I really like it here, it’s a neat little town. The atmosphere is good and my manager, the board members and everyone in the organization has treated me really well, it’s really been a great experience.

I didn’t know what to expect coming here, but it actually really reminds me of the Okanagan Valley to be honest. I moved to Penticton was I was 15 and have spent a lot of time in the valley. But the mountains and the ski areas, you can compare it here to the Okanagan and to the Kooteneys. It’s very similar, and if you didn’t know it, you’d almost think you were in British Columbia anyways.