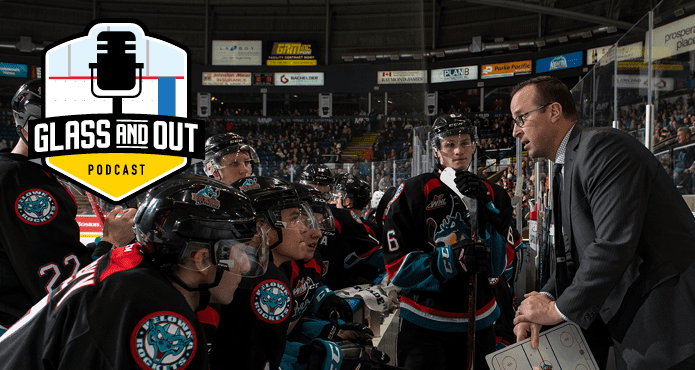 Today marks a special day for the Glass and Out Podcast. We’ve arrived at episode 100! We want to send a special thanks to everyone who’s tuned in over the past few years. Here’s to a 100 more!

We are certainly in bizarre times around the world. When it comes to hockey, you’d be hard pressed to find a coach who had a stranger season than Kelowna Rockets bench boss Kris Mallette.

The Rockets were struggling under head coach Adam Foote with a record of just 24-26-2-2 in late February. With the 2020 Memorial Cup taking place in Kelowna and things not going according to plan, GM Bruce Hamilton decided to shake things up by replacing Foote with Mallette, who had worked as an assistant for five seasons.

Mallette was handed the reigns of a struggling Memorial Cup-bound team with only 14 games remaining in the regular season, all while replacing a well-respected former NHL star, whose son also happened to be the captain of the team and a first-round NHL draft pick.

Then, just when the Rockets appeared to be responding to the change with a 3-0-1 record in the first four games, the season was cancelled due to the COVID-19 pandemic.

In today’s podcast, Mallette discusses his unusual season, climbing the coaching ladder in the Okanagan, and how he is planning to spend his off-season preparing for his first full year as a WHL head coach.