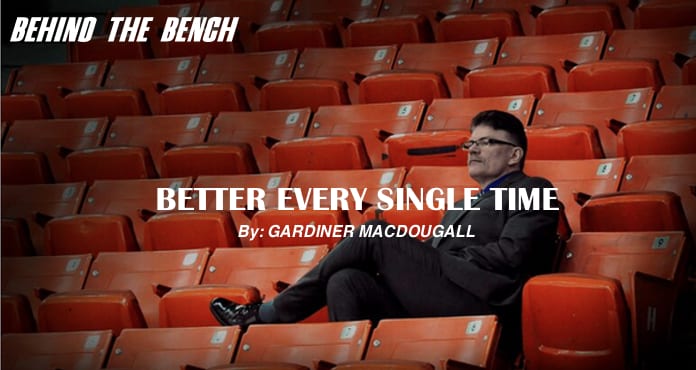 If Gardiner MacDougall weren’t so good at what he does, he could be considered an anomaly. 2016 marks his 16th year at the helm of the UNB Varsity Reds and his contract takes him through until 2019, a tenure that’s practically unheard of in the coaching world.

But there’s a reason why they keep him around. He’s led the V-Reds to four national championships and three Canadian Interuniversity Sport silver medals; he’s been awarded the Atlantic University Sport coach of the year three times and was named the CIS coach of the year in 2010 after leading to his team to a 27-1 record (with 26 consecutive wins), and again in 2015. The 2007-08 team had the most successful season in AUS history (31-1-1) as well as the most wins ever (43) in Canadian university hockey. In 2006, he became the all-time winningest coach in UNB history with 106 wins and in 2014, became the 1st AUS hockey coach to accumulate over 400 wins. Not only that, his players keep setting academic records, too.

The Coaches Site wanted to know what drives him and how he continues to draw the best from his players. Here is what he had to say.

I’m originally from PEI and I went to school at St. Francis Xavier and St. Mary’s so the University of New Brunswick was originally my opponent. I didn’t go to UNB but my sister did—she was a field hockey player and went on to the Canadian national team and participated in the Seoul Olympics—and she always spoke highly of it.

Before I had the opportunity to coach at UNB, I had an interview for the job two years prior and I was very impressed with the process. I had been coaching in Western Canada for about 14 years when the position opened up again. I applied a second time, but they were looking for an alumni to take over the program. The person they wanted ended up not wanting to take it so I guess I was third time lucky.

My son was 10 years old at the time and this was our fifth location, as is typical in the coaching world as you are always striving to coach at a more challenging level. . When you coach, you coach and try to make it the “best ever” experience for your players and fans for that one year and then see what happens. In the coaching world, a long-term contract is a three goal lead in the third period with one minute left in the game, so I guess there is a certain amount of family security in university coaching..

I think the proactive people in this world ask: where can I go and what can I do to make a difference? Part of the mission statement at UNB is “… make a significant difference.” It was a good fit. I get to teach some classes in the faculty of kinesiology and am involved in the leadership with hockey, but it’s always a question of how can I make a difference?

I’ve found the answer is that it’s all about little things. The philosophy here is to be the B.E.S.T, Better Every Single Time, and that’s what we try to get out of our players.

Getting the most out of them comes down to focusing on one part of your game, maybe it’s speed as we want our team to play with pace and our theme is Fast & Faster,  if you get a little better every time you come to the rink , then you see how much better you get after a month and then after a year. We have our guys for four / five years so if we’re doing our job and the player is meeting his commitment, then he’s going to be not only a much better hockey player at the end of four years but a much better person as well by learning so many life lessons on how to compete , how to grow their “grit”  and how to respond to daily challenges..

It was probably the second or third year when I started seeing guys do really well academically. It was almost as exciting to see how well guys were doing in school as winning a game. I like to say enthusiasm is contagious and you should spread the fever, so it is so rewarding to see how well our players do in school.

We had a former player – Denny Johnson from the WHL  who had a 59 percent average in high school but was an Academic All-Canadian (3.5+ GPA) five years in a row while he was here, he became one of the top students we’ve ever had, and now he’s a doctor in Swift Current and works as Sports Psychologist for the Broncos. Many players end up getting their MBA degrees here and we currently have 3 players in Engineering and one in Law School.  Two years ago we had 13 Academic All-Canadians from our group, which is outstanding.

We put up a paper that had the 3.0+ GPA Club on it and it’s amazing to see what that could do in terms of peer value and pressure. But you’ve got to hand it to the players and the environment created by the players that have come before them that has cultivated the importance of academics here and I give them full credit for what they’ve done.

University is a higher order of learning but I think it should be a higher order of giving back as well, so community is another big part of the equation. We try to give back to the community with development camps that our players help us out a great deal and we created our V-Red Prospects youth development program which has really made a big difference in Atlantic Canadian hockey development. We recently had our 23rd and 24th participant from this program play games in the NHL with Logan Shaw from Florida and Morgan Ellis in Montreal..

Then we talk about being builders, building something new that’s special to the group we have. In the fall we beat an AHL team in an exhibition game and also defeated a # 1 ranked NCAA team in exhibition play,.We had tied an AHL team  before but had never beat them, so this group found a way to build on what’s been done. The third thing is being believers, you can’t protect and you can’t build if you don’t believe you can. Confidence is a big part of our program here, the better physical condition you’re in, the more confidence you’re going to have as a player.

When the players come to practice every day, I expect the very best out of them, and our fitness trainer expects the very best out of them, and then they start to expect the best out of themselves. Hockey is the main love but you want them to have values they are going to use when they move on from hockey. When you’ve been with a program this long, you get to see how well the players and alumni have done in different aspects of life. We have had over 50 players play at the AHL level and 4 of our recent grads have signed NHL contracts with 2 of them playing NHL games – last year we had 5 former coaches coaching in the NHL so development is a huge part of our program here as well.

You just signed on until 2019 so what’s next? I’m looking for the next win. There are always new challenges each and every year and as a coach, you have to identify those challenges but ultimately, it’s about doing this better than it’s ever been done before. Even though there are high standards here at UNB, the group this year has found ways to make it even better so it’s exciting; it’s a special journey with the group we have this year.

When a player makes a decision to play University hockey, he can choose anywhere he wants to go. I learned early on that I’m a much better coach when I have great players and am working with great people. I’ve been fortunate to work with terrific staff from day one and we have so many people involved in different ways with our program to help make it better every year – our Sports Pyschologist now works with Tampa Bay , our former video coach is in Toronto with the Maple Leafs while academicially we get tremendous support from the academic community.. My Associate Coach now is Rob Hennigar who played for me for 4 years and was our 4 x MVP and left here on an NHL contract as the CIS Athlete of the Year. After his pro career , he joined our staff last year. He bleeds the program and has done an excellent job with our group and with youth development in Fredericton.

Hockey is more of a passion for me than a job and you can’t have what I have without support and I have a terrific wife and son and daughter who have allowed me to pursue my passion on a daily basis. It was Steve Jobs who said, “life is all about connecting the dots” and unfortunately most people connect the dots after they’ve lived their lives. I see the connections and see that I’ve been very lucky.

There’s a big difference going from good to great and it’s not easy to get there. It’s not easy to have success, you have to put a lot of work into it, you can’t worry about the hours – no National Championships are won by working a 40 hour week so you don’t look at putting hours in, it’s just whatever it takes to get the job done. There’s no guarantee for success but you can put things in place that at least provide a foundation and hopefully the plan works. We’ve been fortunate here at UNB, it’s worked for the most part.