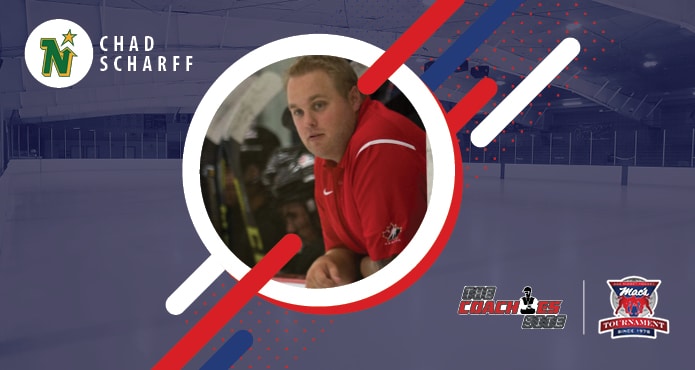 "I’m a big preacher of hard work. The one thing you can control is your work ethic."
5
(1)

Chad Schraff has been to the top of the mountain.

He’s played and coached under a Western Canadian coaching legend in Don Hay.

And he’s done nearly all of it after he thought he left hockey for good.

“When I played in Vancouver, I knew the WHL was probably going to be my cap, but I was always really mature for my age and wanted to get my life started early,” Scharff recalls. “I coached and did some scouting for the Giants after that, but living in Vancouver financially, it was tough, so we moved home. A few months later, I got a call back from our GM at the time, Scott Bonner, and he asked if I wanted to be the equipment manager. I told him he was crazy, but next thing we knew, we were packing up the vehicle and moving back to Vancouver.”

The Coaches Site had the opportunity to sit down with Schraff as his team, the Calgary NorthStars, prepared for the Mac’s Tournament; we discussed his playing experience at the Mac’s Tournament, along with a certain opponent he was told to keep an eye out for, what Don Hay has meant to him in his career, and getting players to buy into the team mindset.

This is your first taste of the Mac’s Tournament as a coach. What kind of preparation are you doing ahead of this event?

“We are fortunate as coaches to have access to video so we can see some teams we’ve never played or don’t know much about, so we can get as much information as we can for our players, as well as talking to other coaches that have played the teams we play against.

“But I’m really going to lean on my Hockey Canada experiences for a tournament like this. It’s one day at a time, you can’t get too down, you can’t get too up. You’re going to have spikes and drops from game to game and shift to shift in a short term competitions like this, so it’s how you can bounce back or stick with it that allows you to have success.

“It’s going to be exciting for sure. I’ll be telling our guys in their first warm-up to soak it all in, but when the puck drops, it’s time to go and it’s just another game.”

You’ve played in this tournament as well, what do you remember from that time in your career?

“I grew up in Airdrie, Alberta, and played for Strathmore Bisons, and I was fortunate enough to be part of the Macs as a player. It was the year Sidney Crosby played in the tournament with Shattuck-St. Mary’s as a 14-year-old and I have fond memories of our coach giving us a speech about this young phenom we had to watch out for. As a 16-year-old, you’re thinking “oh yeah, whatever,” and then I think he scored four goals against us that game.”

You’ve moved around a bit in your career, city to city and even in and out of hockey. What has kept you coming back?

“After I coached in Vancouver, left and then came back in the Equipment Manager role, it was an aspect of the game I really enjoyed and really excelled at. So I spent just less than two years with the Giants and then I was super honoured and thrilled to get an opportunity with the Edmonton Oilers and got a chance to see what that side of the business was like.

“The NHL is a business. It’s a lot of work, a lot of time at he rink, so I made the decision to step down and do some Hockey Canada stuff and had a great four years in Saskatoon, Saskatchewan. My wife and I left Saskatoon saying that was it, I was leaving hockey, and we moved to Calgary to join the Calgary Police Service, but somehow, someway coaching called back.

“It’s probably where I should have stayed from the start.”

You really got an education as a coach right away, working the bench with Don Hay in Vancouver. What were some of your biggest takeaways from that time?

“Don was huge for me. He was someone I really respected as a player. We were a young organization and we needed to learn how to win. There was no grey area with him, which I really respected, you knew your role and you either accepted it or you were out.

“It was a great year for me to get that under my belt to get back into it and feel good about doing it again and get some confidence. Even when I was playing with some of the guys that were still on the team, they always called me Dad because I was always a little more mature than my age and they were great about that.

“The biggest thing for me was I still had that fire of being a player and wanting to change the game from the bench. Just the passion of wanting to be on the ice, but not being able to. When I started coaching with Vancouver I was 22-years-old and I was wide eyed and trying to learn all I could from a legend.”

Now that you’re a head coach, how do you see that transition going and what have you learned about yourself?

“I’m a big preacher of hard work. The one thing you can control is your work ethic. I remember Don telling us I don’t care what the other team knows about us, they know they can’t outwork us. Will outshines skill every day.”

You spent a season with the Calgary Royals organization and then moved over to the Calgary NorthStars, where you are now. What was the reasoning behind that?

“My best friend, Jesse Hale, runs the NorthStars and we got together in August this year and we decided to see if we can make the NorthStars a strong association again. It’s probably the best decision I’ve made.

“He’s not only a friend, but a mentor to me too. What Jesse has been able to accomplish in this game is really amazing. His hockey mind is through the roof and he’s a huge part of why I came over.”

One thing we know about the kids these days is they want to know the “why” of everything. How have you handled that approach with your team?

“The prospects that are in the draft now have agents and they’re so much more in tune with mental health, physical health, development paths and they know where they need to be and what they have to do.

“They want to know why we are doing things and how is this going to benefit them as an individual where, when I played, you were given a role.”

So how do you handle that new pressure? How do you get players to buy into a role they either aren’t comfortable with or think they should be in a different role?

“I just pull from my own experience. I was a pretty good player in minor hockey and I remember going to the Western League and going “oh boy, I better figure something out if I want to stay.”

“I was going from scoring regularly to 10 points a year, 3 goals a season and when I was drafted as a defenseman, they changed the rules of how a defenseman could play, so then it became “Hey Chad, you’re not fast enough, can you play forward?” All of a sudden I’m a 4th liner, I’m a penalty killer, I block shots – but you have to find a way to stay in the game.

“One thing I ask my guys is, since when did becoming a penalty killer and a faceoff guy become such a bad role? There are guys in the NHL that make millions of dollars doing that. If you can adapt your game, if you’re a scorer here, but the next level you may be a 4th liner and if you’re willing to adapt to that, you may have a long future. If you don’t, your career will be brief.

“My message is always I’m here to help you, not hurt you. Any opportunity I give them is an opportunity to try and help them.”