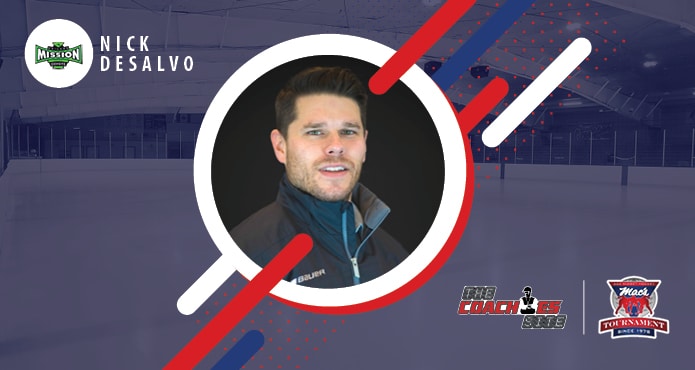 It’s pretty easy to be envious of Nick DeSalvo’s career.

After playing at Bowling Green University, he’s interned with the GM of the New York Islanders and been welcomed into one of the biggest sports agencies in the country, CAA, to work alongside Judd Moldaver and Pat Brisson.

He now shares a coach’s room with Chicago Blackhawks lore and gets a front row seat to sharing practice plans, systems and development ideas with some of the brightest minds in hockey.

“I’ve never been a part of something like this,” DeSalvo says. “It’s been great for a young guy who has passion, but has never played at that level before to watch and learn every day, to understand how they think the game.”

The Coaches Site had the opportunity to sit down with DeSalvo as his team, the Chicago Mission, prepared for the Mac’s Tournament; we discussed the big names he’s surrounded himself with, the Mission’s advantage in previous Mac’s tournaments and his “ah ha!” moment in coaching.

It didn’t take you long to move into coaching after your playing career. Was that always something you were striving for?

“Actually, I always wanted to be an agent. Coming out of high school I had some concussion issues and knew my playing days were over, but my uncle had played in the NBA and my other uncle used to represent him. He used to tell me stories about going to the games and hanging out with the players, and then when you really talked to him about the contract numbers and how they went about it, I knew, this is what I wanted to do.”

What was the progression for you from that point? How do you even pursue the agency side of things?

“When it came to choosing a school, I wanted it to be a hockey school so I could be around the players, the coaches and really understand what everyone was looking for in their career. I wanted to be able to think not only like an agent, but a player as well.

“After Bowling Green, I became Garth Snow’s intern with the Islanders and got to find out what a GM did: how they think, what they are looking at when it comes to re-signing players, adding a guys in free agency, trading for players, draft picks etc. It was fascinating.

“Finally, I got the chance to be move to the agency side for a summer with Pat Brisson’s group at CAA and that’s when the love of it came. The knowledge and the people you meet was incredible, but you learn as well how they start from the bottom, they don’t just walk into any of this.

“There’s not a lot of money in it when you start, it’s long hours and I knew I couldn’t jump into the way I wanted to right now, so that’s where the coaching career kicked in.”

With that kind of background and the experience with those big names in the industry, how do you translate that to the players you have on your team now?

“I think the one thing I’ve learned everywhere I’ve been is, you are the CEO. The player’s name, LLC. You run your company. How you market yourself, how you present yourself, how you perform is going to decide whether you’re going to be a small business that goes bankrupt, or if you become a multi-million-dollar Tesla-like company.

“I always show my players one of Jeff Blashill’s speeches from when he was in Grand Rapids and his message is, you can get up every day and take two steps towards greatness or you don’t. And he talks about how he sees players pass each other every year in development camp. We have guys in our room whose parents are really successful in business, and they are like ‘yup, I knew that but I didn’t realize I could relate this to hockey’ and that’s really special.”

You were with the Chicago Young Americans for a couple seasons before moving to the Mission. What spawned that change?

“The Mission was going to be part of the Chicago Blackhawks new practice facility and, I mean, how can you pass that up? I was a Team Illinois kid growing up and Mission was first starting, but my brother was part of the first group and watching them play and see how they competed, it was incredible. Just to see the compete level in practice and the family culture they create, it’s unbelievable. To go into a coach’s room where you have Gino Cavallini, Anders Sorensen, Adrian Aucoin, Eric Daze, Michal Rozsival, Christian Hmura and Michal Pivonka and you can ask them questions or take a drill, it was an amazing opportunity.”

With those minds available to you, and the people you’ve been involved with in your playing career, how did you form your coaching philosophy?

“It goes back to my Bowling Green days, I had Dennis Williams as an interim head coach and to see where he’s gone with his career is incredible. The next coach coming in was Chris Bergeron and the influence he had on me, I’ll never forget.

“It’s 200-feet with him, it doesn’t matter how many goals you score, or how many points you get, it’s always 200-feet. I think the real ‘Ah ha’ moment was we had a player, who is currently on Chris’ Miami of Ohio team, come back to talk to our team and the first thing he says is ‘200 feet’ and all the players turn and look at me thinking, ‘he one thing coach is harping on, is the first thing you bring up.’

“I always thought the way he talked about 200-feet and being responsible in your own zone, no matter what kind of night you were having, always hit me. You have to have a positive influence on the game, and you can do that without scoring goals or putting points on the board.”

“The first thing we do is sit down with the families and have a conversation to see where the family’s heads at. The second thing is connect them with someone who has gone down that particular path. We have alumni in the OHL, the NAHL, the USHL and let the families pick brains and find out the ups and downs and how that path worked for them.

“The Director here at the Mission, Gino Cavallini, does an outstanding job. The family he’s built and alumni base we have is so special.

“In the end, we want to incorporate the family advisors and with all of us together in a room, we can help them make that choice and that’s one part of the club I’m very proud to be part of.”

You’ve been to a Mac’s Tournament before and you play in a number of tournaments throughout the year. How do you prepare for those when it’s teams you’ve never seen?

“With the way video is these days, it’s incredible. Our philosophy has always been to play fast. We went to the Macs a few years ago and I knew our transition game was going to be faster than theirs, but in order to figure that out, I called a lot of people, whether they were in Alberta, Ontario or BC and the one thing I kept hearing is they are going to play a hard game, but they are not going to be able to keep up with the fast transition, so that was something we always instilled.

“Having been to the Macs, I truly respect all these teams out there, just great coaches. Some of the guys on the other bench, I’m in awe of them. I will say the one thing everyone in Canada told us that stood our most though was the neon jerseys.”

You share a facility with the Chicago Blackhawks, and it is state of the art. What is the biggest takeaway from the kids in that program?

“We have an alumni board when you come into the building, and the players come in knowing the big names, and not just the NHL guys, but it’s the college guys and the US National guys. We’ve been very fortunate to send some players up to the US Development program and they come back here to skate, and they are wearing their Team USA jerseys and the younger guys see that and that’s their focus.

“My older guys are the locker room closest to the entrance for the Mission side, so the younger guys are always walking through, and our big guys are saying hi and building those connections and I think that’s really special and that’s what I enjoy the most.”