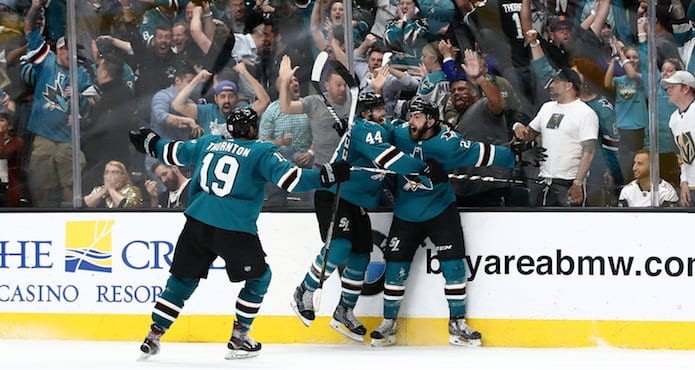 Have you ever watched a hockey game as a fan and found yourself questioning the sanity of the coaches? Perplexed, you try to ascertain just precisely WTF the coach is thinking when he doesn’t play a well-known superstar as much as you’d play him.

If you were on the bench, things would be different.

Well, when people watch your games they’re probably wondering the same things. That’s just it – you don’t know what’s happening on the bench. You don’t know the injury situation. No one knows what type of relationship the coach has with certain players.

At our conference this past summer, we got to relive perhaps the wildest third period of a Game 7 ever, through the eyes of San Jose Sharks coach Pete DeBoer.

With DeBoer’s team down 3-0 to the Vegas Golden Knights and just five minutes remaining in the third period, the Sharks staged an epic comeback.

“I believe the best defence is offence,” DeBoer said. “Playing aggressive, being physical, and forcing them to try and make plays. Backing up and playing safe isn’t necessarily better defensively.”

This game involved the now infamous incident where San Jose’s captain Joe Pavelski was tripped up after a faceoff and hit his head on the ice. It was a gruesome scene, and one which led to a five-minute major on the Golden Knights’ Cody Eakin.

It was the break the Sharks needed, but DeBoer was more concerned with the health of Pavelski.

“The whole series was memorable, topped off by a Game 7 that was the craziest game I’ve ever been part of,” said DeBoer.

But why were the Sharks in that position in the first place? What led to the astounding comeback and Pavelski’s unfortunate injury? Find out from the man behind the bench.

One of the keys to victory for DeBoer was asking for feedback from his veterans.

“You can have the most talented player in the world, but if that player doesn’t respect or value the position you’re asking them to play, then it’s not going to work,” he said. “At least not at first. You might have to sell it.”

DeBoer said he talked to his leaders about starting goaltender Martin Jones, who struggled at times during the series.

And when they got the pivotal power play that eventually led to four goals with the man advantage?

“Joe Thornton told me to leave Logan Couture’s power play unit on the ice after we tied the game,” he said.