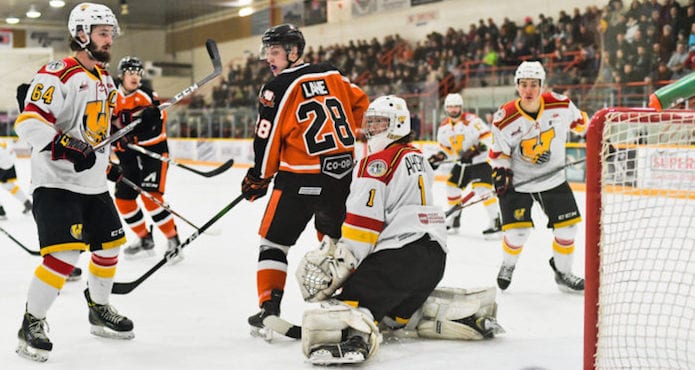 From the drop of the puck to the final buzzer, there’s no situation in the game where a coach has more control than the power play. The coach designs the breakout, how each player enters the zone, and the eventual setup as well. Outside of joining the chorus of fans screaming “SHOOOOOOT,” your work as a power play coach is mostly done when the game is on.

As coaches, we want a goal every time we’re a person up. Sure, we tell our players it’s about building momentum, but we only say that because we want to brainwash them so they’re more relaxed and they score a goal.

So it’s natural to overreact when the power play goes cold. Watching the seconds tick away as an impotent power play expires leads to rash thoughts of blowing it up and implementing panic moves like putting your top shutdown defenceman in front of the net.

You built your power play a certain way for a reason. Define what works, and look for small areas that can help.

Here are some examples from my team, the Winkler Flyers of the Manitoba Junior Hockey League:

This clip starts with a breakout. You can see that everyone is organized and confident.

Even when McCarthy (#19) hard rims the puck, everyone knows where to go. And once we’re set up? Decision paralysis.

Griffin Leonard (#13) kicks out to give Sulivan Shortreed (#27) an option. The problem is Ian Tookenay (#26) does the same thing on the other side. Sure we get a couple shots, but in a 1-3-1 setup you need traffic. Doesn’t work, so what does the coach do?

McCarthy and Shortreed switch sides. We’d experimented before with the two shooters going downhill on their forehands. They make some terrifying passes up top and again generate another chance, but there’s a common theme: no one is in front.

Steinbach’s coach Paul Dyck has seen this dog and pony show before. His penalty killers don’t care who’s shooting from where. They’re too organized for a perimeter power play, and once the puck is bobbled, they pounce.

What could have been a huge boost kicked off a sequence of pain then resulted in us getting our asses handed to us by the eventual league champs.

"A lot of power plays are east-west... We try to play downhill."

5 ways the Edmonton Oilers score goals off the rush (VIDEOS)

It's not always because of McDavid's speed.

He worked his way up the coaching ladder without the pedigree of a professional playing career.