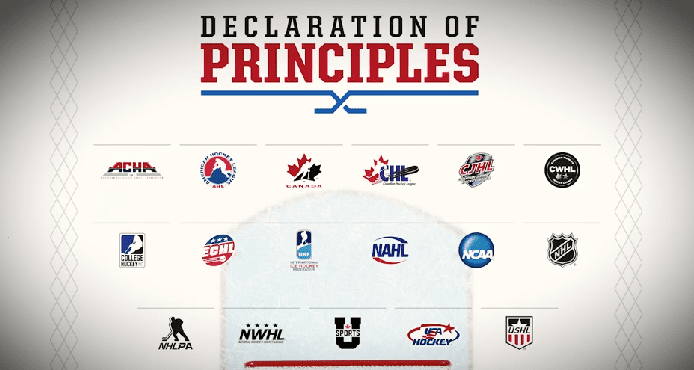 There’s a disconnect between minor hockey and professional hockey. In pro hockey we often hear about athletes who are difficult to play with on and off the ice. The same is true of minor hockey, from initiation all the way up through atom, peewee, bantam, and junior.

Here’s the difference: professional hockey players get paid to come to the rink every day and go to work. Much like a normal office, there are going to be people with whom you’d rather not bbq with every Sunday. But you still have to work with them. You have to be civil. When it comes to minor hockey players, however, the focus isn’t making money or building a career (or at least it sure as hell shouldn’t be).

It’s on building a person.

As coaches, we use our voices through hockey as a medium with which to create enriching life experiences for young athletes. Hockey is a tool, much like a hockey stick, to teach kids about values, culture, and principles.

If we’re asking kids to adopt a set of core principles that will ultimately contribute to society in a positive manner, then it only makes sense that we take a good hard look at out own principles as outlined by our coaching philosophy.

The Principles of Hockey

“How can we support and help build the culture of our sport? How can we make it better?”

That’s Pat Lafontaine. You probably remember him as a prolific goal scorer with the Buffalo Sabres whose career was cut short far too soon. These days he’s wearing a suit in the NHL’s head office.

“Hockey is a vehicle to gives you those life skills, those values, for the rest of your life, long after you’re done playing.”

For Lafontaine, the true foundation of hockey, the crux of its importance, is creating young men and women who are well rounded while they grow up playing. He thinks he’s biased, and so do I, but I believe our game is better than any other when it comes to teaching those life skills. You have to pass the puck to have success on the ice. You have to share the burden of competition with teammates if you want to win.

And that’s the heart of the matter, isn’t it?

As coaches, we all want to win. It’s what drives us. It’s what brings us back to the rink every day.

But keep in mind with whom you’re winning. If you focus solely on the result, then the process you use to get yourself there is going to turn frail and hollow. People will see through you and your principles.

On the other hand, if you operate with integrity, then integrity is what you’ll attract. If you stand behind your players instead of in front of them, if you push your team, parents and all, instead of pulling them, you’re going to maximize the potential of the players.

And if you commit to an ironclad declaration of principles built to withstand pressure, criticism, and judgment, then you’re going to foster a community of people who will seek to do the same.

Because hockey isn’t an individual sport. Neither is life.

Watch more from Pat Lafontaine and the NHL’s Declaration of Principles.