The Process by Jim Montgomery 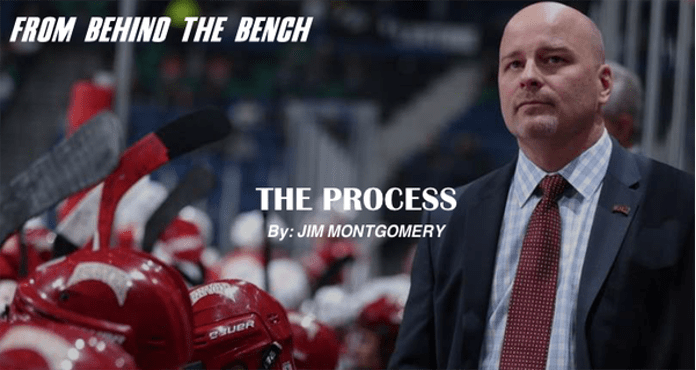 If you’ve heard of Jim Montgomery, you probably know that he’s leading the University of Denver Pioneers to the NCAA Frozen Four semi-final against rival North Dakota. You might also know that he already has a NCAA championship from 1993 as captain of the University of Maine, and that he was named NCAA Tournament Championship MVP. After a professional career that spanned the NHL, DEL and AHL, Montgomery began his coaching career at Notre Dame in 2006, working his way to where he finds himself now, in his third year as head coach of the Pioneers.

Coaches are always searching for an edge when it comes to keeping their team focused under pressure. Jim Montgomery often refers to the, “the process.” Without more detail, the process might seem a little too conceptual or just another coaching buzzword. But Monty keeps winning, so there must be more to it.

The Coaches Site caught up with Jim and he agreed to let us in on what the process is all about, and how it has led his team to Tampa Bay.

“It’s about keeping things simple and boring, really. Simple and boring work well in sports. Through my playing career, I noticed that if I thought about simple things, small details about my game, I usually had really good games; when I worried about the big things like results, I played nervous and didn’t play well.

Coming up with the process was a way for me to relate to my team about what will give us success. When we’re playing bigger games, we always come back to the process and it allows us to play consistently in the big moments when the pressure is on. We always say, “we’re about the process” because it keeps things simple.

I called it the process because if our process is good, the results will take care of themselves. It helps with the mental component, too—when moments get big, we talk about staying in the moment and focusing on our process. We should be focusing on our next shift, or the next face off. The simplicity of the process allows our players to mentally lock in.

So, what is the process? It’s made up of seven things.

3. Give up three or less odd man rushes 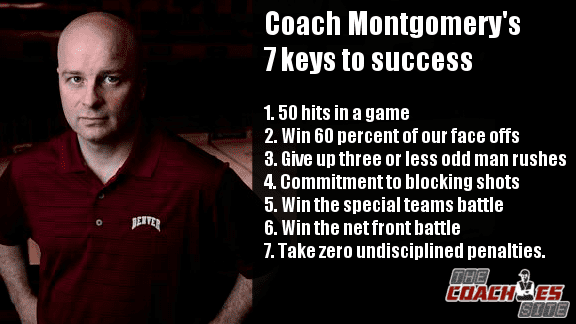 If we’re four out of seven in a game, we’re probably going to win that game. And if we’ve got five or six, the games actually become lopsided in our favour. Like I said, it’s simple.

How did I come up with it? I stole objectives from my head coach at University of Maine, Shawn Walsh, who had 13 objectives. I thought that was too many. There are other coaches with similar strategies who have four or five.

I settled on these seven because they give the team a clear understanding of what to do when it comes to the small details of the game, and it will lead to big results. When we have big games coming up, it’s simple, we stay in the moment and we think about our process. If our details are good, we’re going to give ourselves a really good chance at successful outcomes.

After every game and throughout the year, we go through the process, and time and again, the process predicts the outcome. When we were on our long winning streak this year, 12 or 13 in a row with a stretch where we were winning games by four or five goals, we were achieving all, or close to all, of our objectives. Conversely, when we lost four in a row this year, and we were losing by a lot, our process showed that we were one, maximum two out of seven.

It continues to evolve but it’s never going to change that much. When I was coaching junior hockey, I only had five objectives, but when I got to college hockey, I felt like I needed to add two more—the net front battle and special teams battle because they are so important in outcomes. I’m never going to have more than seven and I would like to get it back down to five because I like simplifying it. But in college hockey where you play so few games, you can have a bit more detail than in junior hockey where we play so many games.

I find that the teams I coach are always better at the end of the year than at the beginning of the year because it takes a while for people to believe and trust the process. But when they do, the results speak for themselves.

The process gives us a foundation of what our house should look like. If we tidy up those areas of our house, people are going to like what our house looks like on the ice.

Going into the Frozen Four, our team is very confident, we’ve been playing great hockey since the calendar year switched to 2016. We believe in ourselves, and we believe in our commitment to each other. Really, if you believe you can achieve, you can accomplish anything.”