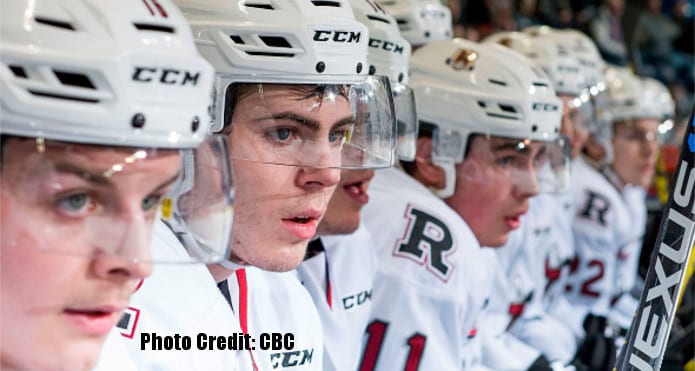 Every year coaches just like you get to coach a new batch of talented hockey players. That is the circle of life in the hockey world. You have veterans who have had the opportunity to adjust to your league’s higher level of competition and are effective contributors to your team.

However, there is a type of player that often can be a challenge for many coaches. This player is often the talented “rookie”. They have been scouted and identified as players your organization deems talented enough to contribute to your team now and as they develop, to be veterans and leaders of your team’s future success.

However, they may struggle with consistency on and off the ice throughout the season. This can present a challenge for your coaching staff and negatively affect their development as players and as a person. In working with rookies, I have identified five areas that can increase a rookie’s stress level. When their stress level increases, the effectiveness of their performances will ultimately decrease. This is due to the creation of horizontal thinking (past or future) that will affect their ability to be mindful and present in their roles on and off the ice. This is consistent with the equation that says, performance = potential – stress reactions (interference).

The following are the five areas that can be the cause of them experiencing stress reactions:

Attachments to outcomes – Rookies often come from being “a big fish in small pond” scenarios. They are used to being the go-to guys. They will often attach their self-esteem to achieving a desired outcome. They will strive to be the best player on the ice. Especially, if they are offensive players, they can have an over-attachment to goals and assists. When they are not getting the points they think they should be getting or are riding the press box as healthy scratches, they may get depressed or feel like they don’t belong on the team. They may lose focus on the process and their shift to shift effectiveness will diminish.

Ritual/routine conflicts – Being housed with billet families, new coaches, teammates, and being in a totally different environment can be can cause ritual conflict and stress for a rookie. Hockey players are noted for being persons of habit and even superstitious about their rituals. It can be around their preparation; post and pregame, evening or morning rituals, or even things they do during the games. When these rituals that form their habits get interrupted or changed the affect can be fear, confusion or anxiety due to the lack of familiarity.

Confidence issues – Confidence can come from having had some positive and/or successful experiences in the past. It can also come from being totally present in the moment, the shift and the game they are playing. For many rookies the calibre of competition is a step up from where they came from. The game may be faster, the players bigger, goaltending better and their ice time to make an impact much less than they are used to. Stepping up in competition can cause confidence issues because of the unfamiliarity of it all. Also, because of the new systems and teammates, sometimes they may inadvertently be overthinking their game. They may be playing by focusing on not making a mistake rather than just being the game, and allowing their talents to flow. Hockey is not just about emotions, it is about energy and flow.

Home sickness/interpersonal attachments – Leaving home is difficult at the best of times. However, when players are still teenagers and connected deeply to their families, it can be an emotionally trying experience. Although, we now have technology that allows us to communicate even at great distance, nothing can replace a pat on the shoulder of congratulations, or a hug from a loved one, when they have had a tough game. Technology can never replace the importance of the human touch and/or presence. When rookies leave girlfriends/boyfriends behind there will be an underlying angst that comes from being part of a long-distance relationship. Extreme loneliness creates a deep internal stressor for a hockey player.

Managing stress/expectations – When much is given much is expected. Playing at a higher level of hockey often comes with higher expectations. There are scouts, the media, fans, agents, family and friends, all watching them play, with their own agendas. Not to mention the coaching staff, and general managers whose main objective is to ice a competitive and successful hockey team. This burden can cause a variety of stress reactions that can lead to poor decision making on and off the ice. The feeling of playing in a “fishbowl” will only be magnified when a rookie is going through a rough stretch on or off the ice. Providing a safe place for rookies to vent their frustrations, stress and disappointment can go a long way to helping them perform at their best.

In conclusion, if these are five areas that can create stress reactions in a rookie, what can a coach do to help them during this transition? Many coaches have their personal approach to dealing with rookies. Someone once said if we can ask ourselves quality questions, then we will have quality actions that will create the quality outcome we desire. The following are a few questions you can ask yourselves in relation to dealing with your rookies:

When all is said and done, a coach can only do so much. It is not just about what you need to do. It is more about who you need to be as a coach for them to flourish in their transition. Being patient, specific in your communication, being encouraging, but most of all being caring and compassionate for them not just as hockey players but as growing young men/women, then, watch them flourish!