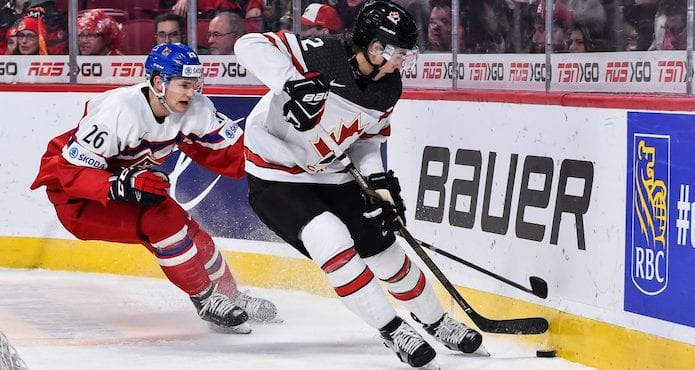 This is a special series of six posts published over the holidays to help coaches watch the skills and tactics that lead to Team Canada’s success (or lack thereof) at the 2019 World Junior Tournament.

Every year it happens, and there’s nothing quite like it: the first shift. Team Canada is notorious for its physical starts to the World Junior Tournament every year. The boys come out guns a’blazing, hitting everything in sight. It usually lasts long enough for each player to have two shifts of action before everyone settles in for the game. And by the point, it might be over for the opponent.

This year, I’m not so sure. These days, coaches rarely encourage their players to take the body and ignore the puck. Instead we focus on checking with sticks. Stick on puck! Stick on puck! Heard it before? Of course you have.

So this year, watch closely for the way Team Canada forechecks. I’m still looking forward to the contact and physicality that comes from a prestigious tournament played by rambunctious teenagers before the eyes of their hockey-crazed nation, but I’ll also be watching closely for how they move their feet to get them into position to check with their sticks.

Stick on puck! Watch for it!