Systems vs Energy & How to Properly Read the Forecheck 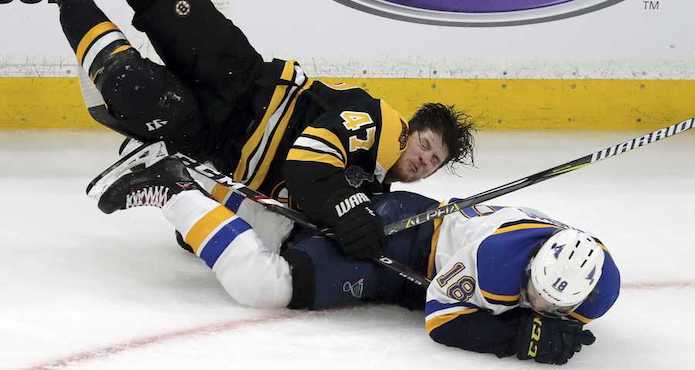 As a coach I always prided myself on the structure my teams played with, especially on the FC. I spent countless hours watching video and over coaching my players in hopes of stifling opposition. What I didn’t realize was, that in an effort to be in the right position, my players didn’t get on pucks with the energy required to force opposition’s D into making a hurried play.

Fast forward to today’s game where there is now an abundance of speed and size, and we see we witness what happened in game 2 of the Stanley Cup final. Yes, both Boston and St. Louis are teams with structure, but their forechecks are more based on the energy F1, the reloading by the high F and D reads.

Possibly the two best forechecking teams this post season, the Stanley Cup final has been an absolute war. With big hits that have caused both teams to lose key players, game 2 of the final was a treat to watch if you are a fan of physical play. St. Louis established their forecheck right from the drop of the puck and was impressive, forcing turnover after turnover.

The Blues had complete buy-in from their forwards to get pucks in behind Boston’s D, forcing them to have to break pucks out facing the glass more often than not. Even the best D in the world struggle to make clean plays when they have no vision of what’s behind them along with knowing they are going to be hit with every touch of the puck.

In total, Boston’s D had 36 possessions below the bottom of the circles. Those possessions came from 4 specific areas: