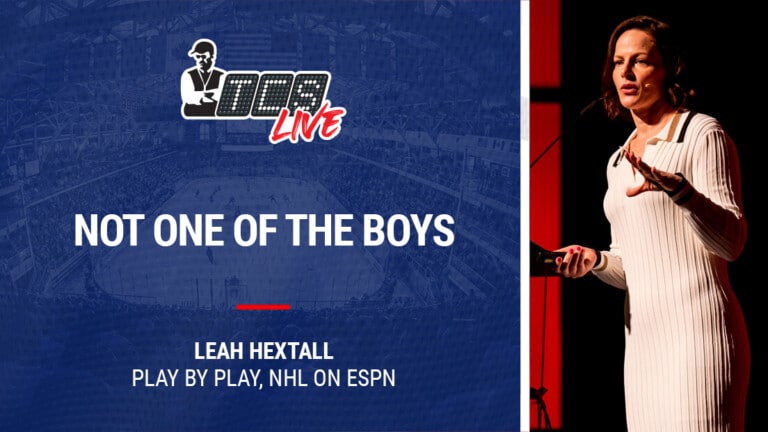 It’s all about intent in hiring in order to open up doors of opportunity for those who have not traditionally been represented in hockey.
5
(2)

Hextall is a trailblazer and when the ESPN commentator speaks, well, she always has something important to say.

That was especially the case when she spoke as one of the headliners at TCS Live, hockey’s premiere coaching conference, this past June at the University of Michigan.

What Hextall had to say was raw, emotional and shocking, but sadly not surprising. She and I grew up in the same hometown and were coworkers way back in the day, so it was extra sad to hear that a friend of mine, a shooting star breaking barriers in the NHL broadcast booth, was being treated this way.

Play-by-play commentators often feel like friends to us all. They’re with us during some of the most memorable sports moments of our lives. Be prepared to feel as gutted as I still do when you watch the video below.

This is no normal presentation. It contains strong language and mature subject matter. Viewer discretion is advised.

Last season was Hextall’s first on the mic calling play-by-play with ESPN. She was on top of the hockey world and a shining example of a woman doing an unbelievably great job at something typically only men have been given the opportunity to do. She was not able to thrive, however. Instead it was more about her trying to survive.

“While I loved the opportunity to grow and develop in the role and get to cover a sport that is like family to myself in that I love it so much, I realized through this journey that we still have work to do when it comes to gender and diversity in our game,” Hextall told The Coaches Site in late August.

“I thought we were further along than what we are, but due to what I experienced on social media and also within the game when dealing with hockey people on a day-to-day basis, we are not where we need to be. It’s because of a lack of representation when it comes to women in the game. The positive aspect is that I believe QUOTE, so we can have more representation of not only women, but anyone who has traditionally not been represented within our sport.”

Hextall’s 27-minute presentation was the highlight (and lowlight, understandably) of TCS Live and of the 36 presenters who spoke during the three day hockey coaching masterclass, no one’s talk garnered more support from those lucky enough to be in attendance.

“Overall I did have some trepidation giving this speech because I wasn’t sure how my message would be received, but it was overwhelmingly positive feedback. The audience, not only did it connect to my individual story and my journey to get where I am, it also connected to the message that we do need to do more in our game and that we’re not where we need to be.”

Hextall is part of a long hockey lineage. Her grandfather Bryan Hextall is in the Hockey Hall of Fame having scored the overtime game-winning goal to win the 1940 Stanley Cup with the New York Rangers, uncles Bryan Hextall & Dennis Hextall combined for over 20 seasons in the NHL, cousin Ron Hextall played for the Philadelphia Flyers and is the current GM of the Pittsburgh Penguins, and father Randy Hextall attended an NHL training camp with the St. Louis Blues.

Leah pinches herself every day that she’s paid to cover the sport she grew up loving and playing on outdoor ponds. When asked to speak at TCS Live, the timing was right for Hextall to use her influence and love for hockey to try and influence positive change in the sport.

We at The Coaches Site wanted to give Hextall the platform because we believe in her message and stand behind her and her mission to change outdated hockey norms.

Attendees left TCS Live moved by her words and Hextall is hopeful their next hiring moves are diverse, without bias and based on merit, with factors unrelated to job performance (age, race, gender, religion, sexual orientation, physical or mental disability) cast aside.

“I think a lot of people left the conference thinking in a different direction. Perhaps they took that knowledge back to their programs so they can start thinking about how they can bring more women into hockey and provide opportunity.”

All that being said, Hextall knows it’s not as easy as simply hiring a woman in hockey. It has been a male dominated sport since sticks first hit the ice.

It’s all about intent in hiring in order to open up doors of opportunity for those who have not traditionally been represented in hockey.

“That’s what I want people to understand,” explained Hextall. “I’m not saying there’s a million women out there to hire as assistant coaches in the NHL. But at least when you’re going to hire someone, ask people: ‘hey, do you know any women or people of colour who would be a good fit in this role?’ We have to expand our thinking and not just go back to the well of what we’ve always done; just because someone isn’t fully qualified, it doesn’t mean they’re still not qualified. They just need an opportunity.”

Thank you for making the most of your opportunity Leah.

The focus of the panel was to provide tools, strategies, and mentorship for women who have aspirations of a career in hockey. Hopefully there are many more jobs available to them soon.