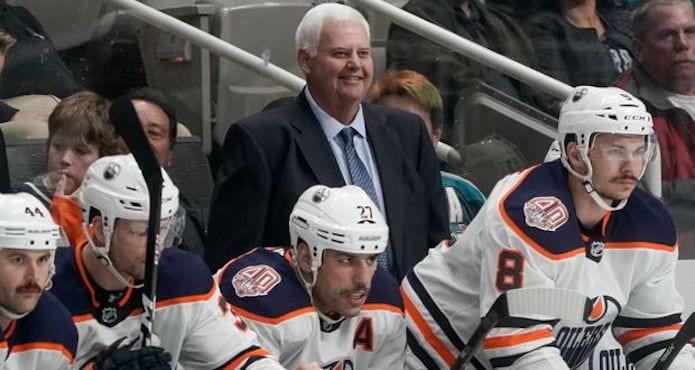 The National Hockey League has seen four head coaches dismissed this season. This after not one NHL bench boss lost his job last year. As an unapologetic coach’s apologist, it’s difficult to watch people like Todd McLellan and Joel Quenneville lose their jobs, even though for all I know they completely deserved it. I don’t know these men, I don’t know what happens behind the scenes. Ditto for Mike Yeo in St. Louis, who by all accounts is an incredible human being. They all are, right?

But incredible human beings lose their jobs all the time. To borrow a tired cliche, it’s part of the business, but every business is run with its own unique mix of ingredients such as compassion, support, trust, and the lack of all three.

So, now that I can write the remainder of this post content I’ll be able to sleep tonight, here are three benefits of a mid-season change at the head coach position.

In Edmonton, Ken Hitchcock wasn’t part of the regime that signed Milan Lucic to an expensive contract. Todd McLellan didn’t sign the Vancouver native either, but he was hired by the man who did. I don’t care how long you’ve been coaching or how professional you are – limiting the ice-time of your boss’s prized new hire is hard. Lucic had every chance to succeed under McLellan and didn’t deliver.

Ken Hitchcock isn’t bound by the same loyalty. It’s his job to get the Oilers into the playoffs, and if that means placing Milan Lucic in a new role, then so be it.

The funny thing about willful ignorance is you can pick and choose your narratives. Ken Hitchcock remembers the Milan Lucic from junior hockey with the Vancouver Giants, but he’s got the green light to ignore his cap hit. Nice.

The Chicago Blackhawks have won Stanley Cups based on their strength at the top end of the lineup, but that core isn’t surrounded by enough support any more to even get into the NHL’s second season. Enter Jeremy Colliton, the 33 year-old fresh new face behind the bench who began his coaching career with the Blackhawks’ AHL affiliate Rockford Ice Hogs.

Imagine being a young player spending the first month of the season up and down between the show and the minors, and suddenly your new coach with the big club is the same voice with whom you had success when you first turned pro in the American League. You’re going to feel a new sense of motivation, yes?

And by association, players without that personal relationship might push just a little bit harder to maintain their positions higher up the lineup. The inverse could also be true: Ken Hitchcock had Ty Rattie and Kyle Brodziak in St. Louis. It will be interesting to see how that turns out.

The point in all of this isn’t to light the fire beneath your feet indicating an imminent potential coaching change. No, it’s that we should feel the possibilities of change within ourselves, and who cares about what the suits upstairs are thinking. If something in your lineup isn’t working, try to eliminate previous context. What does the player do well? What are their limitations? Now is the time of year to move on from failed experiments and in turn try new ones.

Your innovation might not work in the longrun, but don’t be afraid to try. Powerplay not clicking? Move the personnel around. Put a forward up top and move a defenseman to a one-timer position. Give an opportunity to someone in your lineup you might previously have typecast in a certain position. The energy created by these moves will have a ripple effect throughout the lineup, and who knows, you might surprise yourself with a new solution you previously couldn’t have imagined.

Or you might get fired because of it. But that’s out of your control.