Threatening the Net & Shot Volume on the Power Play 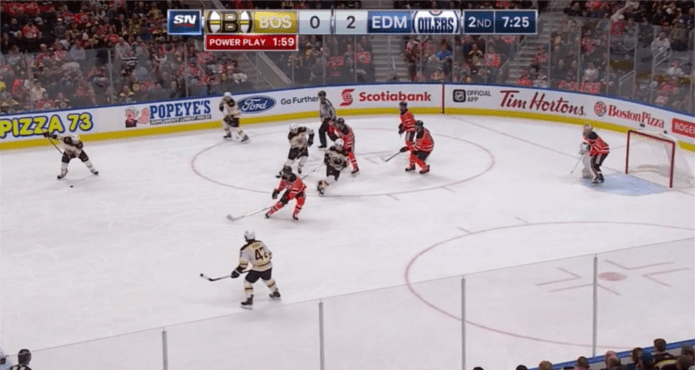 One element of coaching that’s often lost in translation with our players is how badly we want more shots on net. It’s part of the reason the cross stat (shot attempts for vs shot attempts against when any given player is on the ice) has evolved into Fenwick (same stat, just unblocked shot attempts). As the slapshot goes the way of the dodo bird because every player in every league is counted on to block shots and it’s easier to get a wrist shot through traffic, it’s more important than ever for forwards and defensemen on the powerplay to threaten the net.

Which doesn’t always mean shooting the puck no matter what.

The Boston Bruins are a top 4 team in the NHL, and might be hoisting the Stanley Cup when all is said and done, especially if their powerplay continues to improve and catch up with their unreal penalty kill.

Let’s take a look at a recent B’s powerplay vs the sad-sack Edmonton Oilers. Off the faceoff, second-year standout David Pastrnak lines up at the point, and upon receiving the puck, the first thing he does?

The Oilers forward stiffens up in terror and from then on the Bruins have complete control. A simple fake and Pastrnak’s unit generates multiple shot attempts and a simple seam pass that makes the mighty Oil look mighty inferior.

The Oilers manage to clear the puck, but coming back up the ice the Bruins are confident and comfortable. They know they can make plays and generate shot attempts. After another zone entry and an uncontested Brad Marchand shot off the rush that forces Cam Talbot to be sharp, the Bruins set up again.

So what’s happening here? First, a confident Marchand, a minute and a half into his shift, beats Jujhar Kaira with an escape at the blueline. Brandon Davidson has to respect the shooting threat at this point – why wouldn’t he? Pastrnak dared the Oilers PK not to with the first play of the shift. Marchand uses that to his advantage and #51 Ryan Spooner is wide open back door. They don’t score, but the Oilers panic, and the Bruins pounce like… well, like a bear on a floundering trout. And who gets the last shot, which surely would have gone in if the Oilers’ net minder wasn’t battling far harder than his teammates?

So no, the Bruins don’t score on this powerplay. But as the old saying goes, they generate some good old fashioned momentum, some confidence, and despite being down 2-0 after 40 minutes they score 3 in the third – one from a bounce in front of the Oilers net after a stuff attempt, one from a hard shot and a rebound, and one from the slot by a wide open Bruin.