Tim Turk has been an NHL shooting and scoring coach for over 25 years, working with the Montreal Canadiens, Tampa Bay Lightning, Carolina Hurricanes, and Arizona Coyotes, as well as many national team programs overseas. Specializing in shooting, passing, and puck preparation and control, he also teaches the technical aspects and strategies of puck protection.
Tim continues to work with NHL players, but also minor hockey teams, coaches, and players of all ages and skill levels.

A common comment NHL shooting and scoring coach Tim Turk will make after a player takes a shot is “nice hips!” This might not be common feedback where you’re from, but for a player who understands the drawbacks of fighting for counter-balance, they know exactly what Tim is talking about.

If a player at the NHL level isn’t developing his skills and improving on a daily basis, then somebody else will come along in short order to steal his job. This is a fact of life in professional hockey, but the great thing about skill development is it starts in minor hockey. Habits. Motivation. Work ethic.

Tim Turk has been a shooting and scoring coach for two decades, including stops in the NHL with the Montreal Canadiens, Tampa Bay Lightning, Carolina Hurricanes, and Arizona Coyotes, in addition to programs in Sweden, Asia, Finland, Latvia, and Russia.

Tim helps players focus on establishing balance and a base from which they can shoot, pass, and stickhandle. Players who work with Tim can shoot off one foot or two, but both techniques require a posture that allows for the power position. 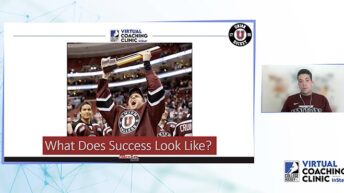 Winning the War for Talent, with TJ Manastersky (VIDEO)