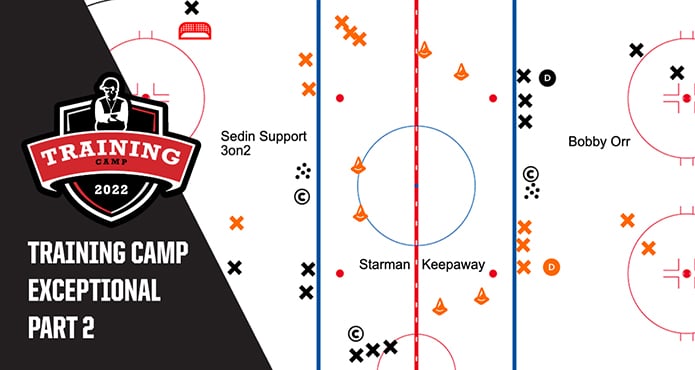 Is starting training camp off with a scrimmage the right approach? Not if you want to boost confidence off the hop.
5
(7)

Now that your training camp is organized, your people are empowered, and your athletes are checked in and feeling confident in their opportunity to show their stuff, it’s time to hit the ice. It might seem obvious at first to simply split up the teams alphabetically and huck a puck on the ice, but you if you’re eager to identify the best group of players to move on to the next phase of camp, then there are ways to boost your efficiency.

Starting camp with a scrimmage is often ceremonial at best. There’s no doubt the players should be in prime physical condition when they arrive to camp, and if they’re not then that’s on them.

What’s on you, however, is providing an environment in which confident competition can thrive. Like we talked about in part one of this series, culture builds confidence and confidence builds performance. Picture a 19-year-old stepping onto the ice with a player whose poster he had on the wall in his bedroom as a kid. It’s intimidating. That’s mostly because hockey players often don’t want to rock the boat – they don’t want to be seen as arrogant or cocky, which is fine.

But you want them to perform. You want your young players gunning for your older players’ jobs, and if they earn that position then your team will be stronger as a result. On the flip-side, you want your returning players to make that as challenging as possible, so it’s vital to have them performing their best when exhibition games roll around. Not every athlete is built with ice in their veins, and as such many will feel their way into training camp. So instead of fighting that fact, work with it.

This is the first of a 6 part series called Training Camp Exceptional. Here’s the criteria we used:

Is starting training camp off with a scrimmage the right approach? Not if you want to boost confidence off the hop . . .