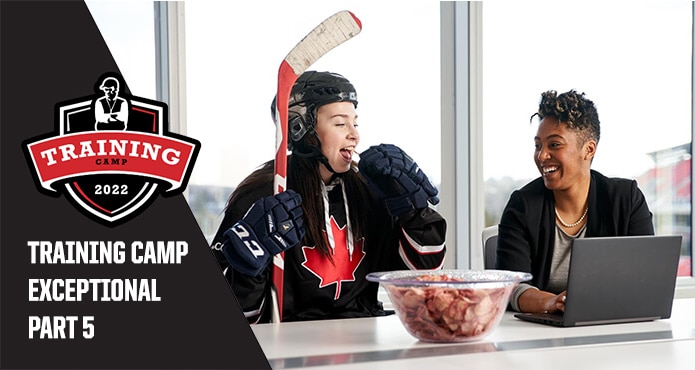 Dignity, respect, and gratitude are the rule of the day during uncomfortable exit meetings. Maybe Ketchup chips too.
5
(3)

Each coach who contributed to this series stressed the importance of honesty as the backbone of your exit meetings. And backbone is certainly required – releasing a player is never a fun task, but it’s a necessary one unless you want to carry a huge roster and chip your problems off the glass into the neutral zone where they’ll inevitably come back to haunt you.

Provided you’ve been thorough during training camp, you should feel confident in the decisions you and your staff have made. As we’ve seen earlier in the series, if you know what your team needs on or off the ice and you’ve communicated your expectations, then a lot of your decisions should become obvious. Hopefully you’ve gone into training camp with an open mind, because some of the best decisions you can make might come as a surprise, but that’s what training camp is for – happy surprises.

Whether you’re releasing a player or moving them on to the next phase, exit meetings are rarely comfortable.

Now imagine what the player is feeling on the other side of the table – maybe having Ketchup chips there like in the stock image above might help?!

This is the fifth of a six part series called Training Camp Exceptional. Here’s the criteria we used:

“I think having an honest conversation about the player’s game, what’s positive and what they could focus on to continue their development and how to attain the goals they’ve set for themselves.”

Kelowna Rockets head coach Kris Mallette takes a balanced approach to his exit meetings, and you’ll notice in the quote above that it’s ambiguous with regards to whether or not the imaginary player made the cut. That’s because an exit meeting at the end of camp can be a powerful tool to build the confidence of a player who’s sticking around. Once they know they’re not going home and they can breathe a sigh of relief, they’ll be keen to know why.

Dignity, respect, and gratitude are the rule of the day during uncomfortable exit meetings. Maybe Ketchup chips too . . .