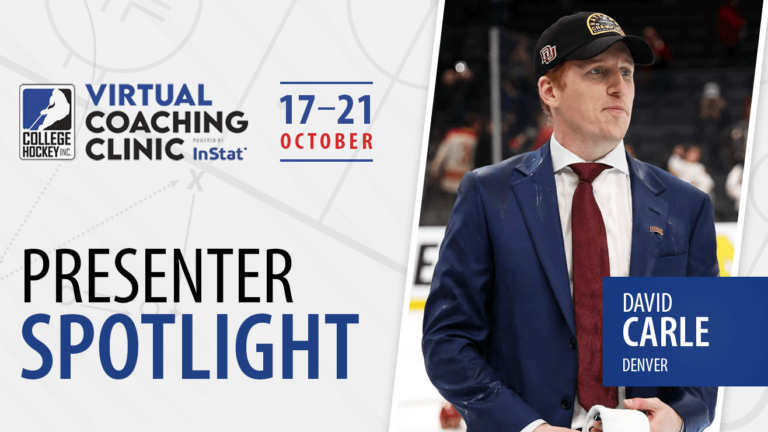 David Carle is one of two reigning National Championship coaches presenting during our Virtual Coaching Clinic.
5
(1)

David Carle is a coaching pioneer. He also happens to coach the Denver Pioneers.

This past season Carle, the ninth head coach in the history of men’s hockey at the University of Denver, led the program to its record-tying ninth national championship. It was just the 32-year-old’s fourth season behind the bench; when hired, the product of Anchorage, Alaska, was the youngest head coach in NCAA Division I men’s hockey.

Interestingly enough, coaching wasn’t Carle’s end goal. Carle played defence at Shattuck-St. Mary’s in Minnesota, where he helped the team capture back-to-back national titles in 2007 and 2008 and was recruited to play at Denver. His NHL aspirations ended when an abnormality was found during a combine physical and Carle was diagnosed with hypertrophic cardiomyopathy. The condition, which is estimated to affect 1 in 500 people, forced Carle to quit hockey.

University of Denver, which had recruited Carle to play for the Pioneers, honoured the scholarship; instead of stepping onto the ice as a player, Carle served four seasons as a student assistant coach behind the bench with the Pioneers, before graduating in 2012 with a business administration degree in finance.

During the upcoming College Hockey Inc. Virtual Coaching Clinic, being held from October 17-21, Carle will be joined by John Buccigross, co-host of ESPN’s SportsCenter, for an in-depth interview.

During their one-on-one, expect Carle to discuss his life-changing diagnosis and still being drafted by the Tampa Bay Lightning, how he was able to mature so quickly behind the Pioneers bench, and what has helped him lead the team to an 86-43-13 overall record and a 49-36-9-8 mark in National Collegiate Hockey Conference play in his four years as head coach.

Carle, who served four and a half seasons as an assistant coach with the Pioneers under Jim Montgomery before becoming head coach, is one of two reigning National Championship coaches presenting during our Virtual Coaching Clinic. Nadine Muzerall from Ohio State University is also taking part.

This event is exclusive to members of the Coaches Site, so if you’re not already a member, sign up today and save $50 on an annual membership for a limited time.