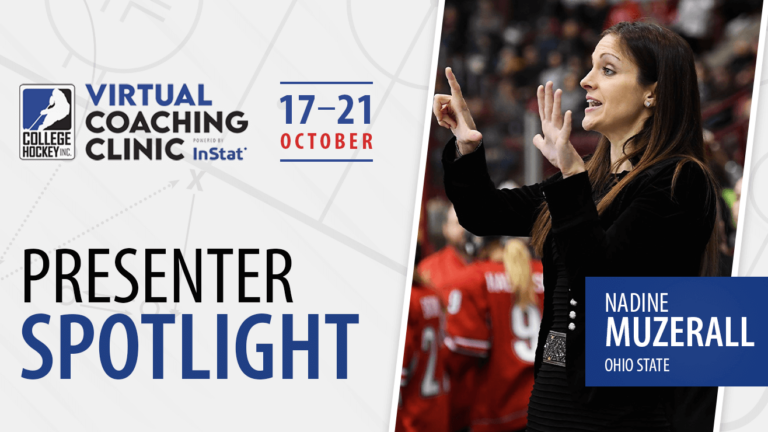 The seven-time NCAA Champion will share her secrets to success during the Virtual Coaching Clinic.
5
(1)

If someone were to ask you how the Ohio State Buckeyes are doing this season, most people would turn to football for the answer. And justifiably so.

OSU’s football program is legendary. It’s been around since 1890, the team has won eight national titles, produced 90 Consensus All-Americans and seven Heisman winners.

The football program’s success has been rivalled since 2016, however. That’s the year Nadine Muzerall arrived on campus and took over the women’s hockey program. That first season, Muzerall not only improved the team’s win total from a season prior, more importantly she established a culture and mentality that would pay off shortly thereafter.

The following season, Muzerall’s Buckeyes made the NCAA tournament and NCAA Frozen Four for the first time in program history. Two seasons later and Ohio State was WCHA Champions and repeated as WCHA champs this past season, when the Buckeyes also added NCAA National Champions to their accomplishments!

In 2022, Muzerall was named the WCHA Coach of the Year for her third time in five years after leading the Buckeyes to their fourth 20+ win season of her tenure and program-record milestones, including the record-breaking 2021-22 season that saw the Buckeyes earn their very first No. 1 national ranking and No. 1 NCAA Tournament seed before winning their first national championship.

During the upcoming College Hockey Inc. Virtual Coaching Clinic, being held from October 17-21, Muzerall will take part in a one-on-one interview with Laura Halldorson, her former coach and a three-time National Champion with the University of Minnesota.

Muzerall, who hails from Mississauga, Ontario, was a star for the Golden Gophers as a player before serving as a member of the coaching staff. The first women’s hockey player to be inducted into her university’s hall of fame, Muzerall still sits atop the all-time goals scored list with 139 and graduated as the career points leader for Minnesota. As a member of the coaching staff, she helped guide her former team to four national championships and five-consecutive spots in the title game.

Muzerall is one of two reigning National Championship coaches presenting at the College Hockey Inc. Virtual Coaching Clinic. The event is exclusive to members of The Coaches Site, so if you’re not already a member, sign up today and save $50 on your annual membership.

Want a sneak preview into Muzerall’s coaching journey? Listen here to episode #177 of the Glass and Out podcast where she discusses how she reshaped the culture at OSU, her unique mentorship from John Tortorella, and the offensive philosophy that led to her squad putting up a staggering 175 goals in only 29 games.

FlipGive: the Management Tool that Gives your Team an Advantage