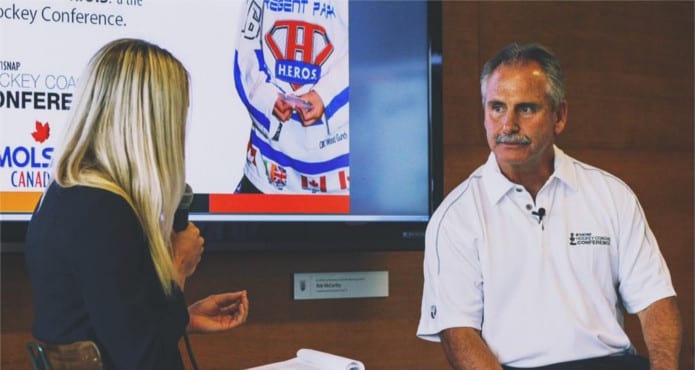 Watching Willie Desjardins’ speak in the excerpt below and the full video on our members’ site was a little conflicting. I’ll be honest – I love hearing what the former head coach of the Vancouver Canucks has to say. He’s laid back, down to earth, relaxed, and quite strong in his philosophies.

But it’s difficult to watch the interview knowing that it wouldn’t be much longer before the Canucks relieved the veteran coach of his responsibilities.

Coaches are hired to be fired, right? That’s the common phrase. The neat thing about Willie, and about most coaches for that matter, is they operate based on a firm foundation of beliefs and tactics, and being fired won’t shake that foundation, although it should definitely add a couple items to the shelves.

Here’s some of my highlights from the full wide-ranging interview, previewed in the excerpt below.

1. You Don’t Know Who You Are Until You Lose

The interview gripped me from start to finish, but one thing that stuck out was Willie’s belief in the power of losing. When he took over the WHL’s Medicine Hat Tigers, he certainly had his work cut out for him. But for the coach, the losing culture made it that much easier to recognize what wasn’t going to work in the future.

The Sedins are two of the toughest hockey players Willie Desjardins has ever coached. Why? Because no amount of pressure, physical contact, interference or frustration can shake their pure vision of the game. In the interview Willie tells a story about the twins lining up for the faceoff, one gets slashed by Ryan Getzlaf, one gets slashed by Corey Perry, but neither reacts. They just play. Their vision of the game is pure and no amount of external detail will distract them from that vision.

3. Why Is Willie Always Holding a Whiteboard?

Most coaches keep a whiteboard nearby on the bench to draw plays or teach their players about positioning or some other strategic element of the game.

Well, Willie is not most coaches, and there’s a reason you’ll rarely see him actually using the board to draw anything. No, he holds it close just to protect himself from the errant pucks.

His words, not mine! Don’t believe me? Watch the video and hear for yourself!
If you enjoy these video excerpts, remember you can sign up for a free 30 day trial on our TCS | MEMBERS site. This gets you access to our entire library of videos from our annual TeamSnap Hockey Coaches Conference. You can cancel any time, although after joining a community of coaches from all over the world using the videos on a daily basis to pick up new tips and stay relevant, we doubt you will.